Showing posts from December, 2012
Show all

Caught In Between (Part III)

December 28, 2012
This is the third installment in a multi-part series narrating Beirutista's upbringing abroad and her wrestling between different cultures. See other posts in this series here: Part I , Part II , Part IV At UC Irvine, I was vigilant for any scent of Lebanese life. I scouted Ring Road, the campus perimeter, during club week and discovered the Lebanese Social Club as well as the Society of Arab Students, both of which I quickly signed up for. In classes, too, if I overheard anyone speaking Arabic or if their appearance seemed mildly Mediterranean, I'd summon the courage to introduce myself. There were two--cousins, in fact--in my sophomore engineering statics class who, coincidentally, hailed from the same city where we live in Lebanon. But having freshly arrived from Lebanon, they were anxious to mask their roots and blend in with American mainstream society, a stark contrast to my pride in my heritage. I had shed the self-consciousness from my days in grade school, and no
4 comments
Read more 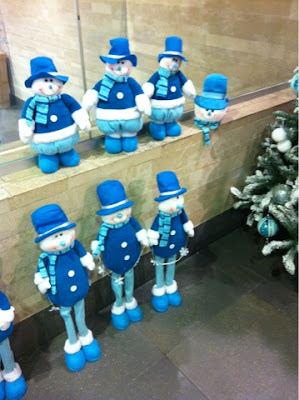 They're called snow men for a reason. Personally, the snow head resting on the ledge strikes me as eerie.
Post a Comment
Read more

I confess: Gustav's pastries are decadent. The Hamra patisserie has catapulted into fame for its red velvet cake balls, and it's no wonder because the small spherical bites pack a dense, doughy richness that can't be found anywhere else in Lebanon. 3,500LL ($2.33) seems a bit steep for something so small, but Gustav can get away with it--it's a monopoly, after all. But when a chain coffee shop just a few blocks down from the distributor charges 8,000LL ($5.33) per ball, that's a criminal offense. Second Cup features a selection of cakes, viennoiseries, and muffins in addition to its specialty coffees. Half of those pastries come from Gustav, and what drove me wild last week as I sat inside Second Cup watching customer after customer fork over one form of dough for another was the cafe's selling strategy. Brilliant but felonious. None of the pastries have a price displayed. And everyone knows Lebanese people wouldn't be caught dead asking for the price o
3 comments
Read more 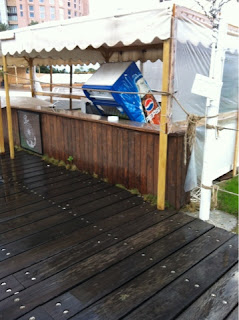 Lebanon's wet season is well underway, and it hasn't been merciful. Gusty winds knocked over this soda cooler down by St. Georges Bay.
Post a Comment
Read more 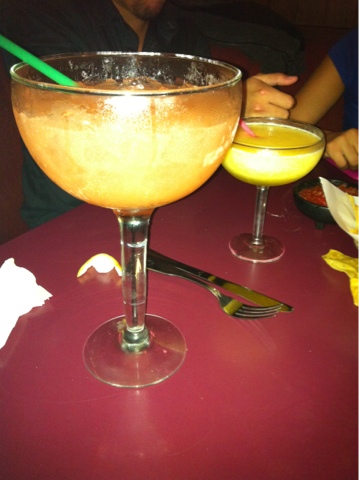 My last week in the US was celebrated with a Carnival cruise to Avalon and Ensenada, in Baja California. Days were spent lounging, sunbathing, and eyeing the extensive buffet with temptation and angst; nights were filled with comedy shows, Las Vegas style performances, and fancy four-course meals. But this trip brought me to one startling realization: how fat America has become. If you ever want to fully understand the meaning of "morbidly obese," board one of these ships and see for yourself. I'd venture to say that a good three-fourths of the passengers were easily overweight, and to my surprise and grief, they exercised no restraint at mealtimes (and every minute in between). One main dish at dinner simply wasn't enough; they required multiple to be satiated. Food was available around the clock: the pizza parlor and frozen yogurt bar never shut down. Lunch could be had as soon as 11 am and lasted so long, it ran into dinner. But what really shook me up is the
Post a Comment
Read more
More posts