Showing posts from December, 2014
Show all

As your self-appointed reporter on happenings around Zaitunay Bay, today I bring you the latest on recent and forthcoming restaurant openings. The beautiful seafront district, lined with over a dozen restaurants and coffee shops, has seen more than its fair share of changes in the three years since it debuted. In fact, only 10 of the original 17 venues have stood their ground. There’s Coffee Bean and Tea Leaf, Babel Bay, Cappuccino, Paul, Moti Mahal, Cozmo Café, Classic Burger Joint, Lina’s, St. Elmo’s Brasserie, and Karam al-Bahr. Others including Cro-Magnon Steakhouse, Salmontini Riva, Amarrès, Zabad, and Signor Sassi—all fine dining spots—shuttered. The Alshaya Group, founded in Kuwait in 1890 and presently figuring as the largest retail group in the Middle East, introduced Zaitunay Bay to Starbucks and Pinkberry just a few months ago and will soon be launching the third branch of PF Changs where Amarrès used to be. Italian ristorante Al Forno is also slated to open by Als
2 comments
Read more 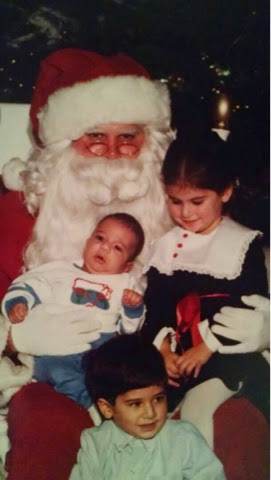 Growing up, Christmastime was as magical for me as could be expected for any child in love with life. I was enraptured by Santa, his elves, the toy factory in the North Pole, and his entire fleet of reindeer. Seriously, I was that child who adamantly believed in Santa until I was a solid 10 years old. I still remember how the "enlightenment" unfolded, and how my whimsical world came crashing down around me. I had gone to the car to fetch something from the trunk, and nestled inside was “Miracle on 34 th Street,” the very movie I’d written pressingly to Santa requesting as my gift for the year. My lips quivered as I approached Mom, and when I explained what I’d seen, she grew perplexed and looked away. Sadness overcame me, and I don’t quite recall how Christmas was salvaged for me that year, but I think a fair dose of Christmassy movies did the trick. Christmas always descended upon the Issa household the weekend of Thanksgiving. Dad would haul down the tree fr
2 comments
Read more 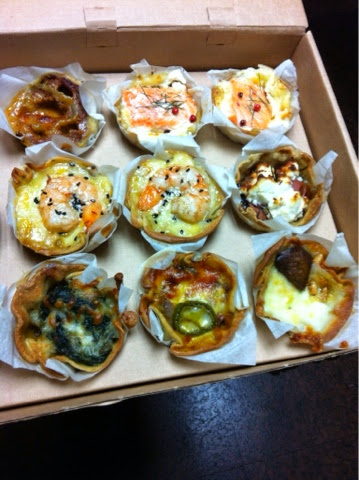 My fascination with Cup & Roll, the brainchild of young friends Wassim Haddad and Khajag Apelian, is no secret. Originally launched as Pizza Cups and operating from the home kitchen of Apelian’s mother Salpi, the startup was rebirthed into “Cup & Roll” and features a delicious array of savory and sweet bites in the form of—you guessed it—cups and rolls. Last week my interview with Haddad was published on Beirut.com  and quickly climbed to top post on lebaneseblogs.com . If you’re interested in the evolution of the concept and the entrepreneurial vision that has closely guided this startup’s growth, be sure you check out my feature. If you happen to be a foodie and are more enraptured by the edible aspects of the company, read on. I had the privilege of sampling a varied selection of cups and rolls, including the season’s exclusive flavors: Salmon Supreme, Shrimp Extraordinaire and Prosciutto Primo. Let me start by saying that the marketing photos displayed on the Cup
1 comment
Read more 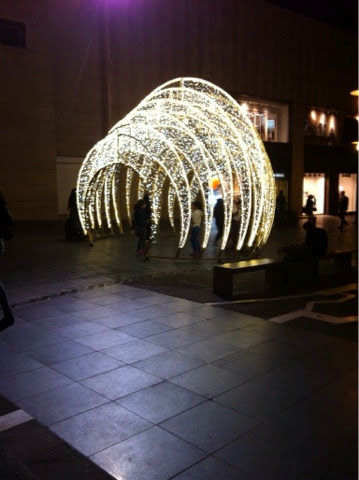 Go ahead and censure me, but I’m not liking Beirut Souks’ Christmas spirit this year. No, it’s not the Christmas decorations that have got my feathers all ruffled—I rather like the white- and red-garland trees that dot the outdoor mall landscape. I also found the “I ♥ Beirut” in life-size block letters to be cute and original. Way to embody the #LiveLoveLebanon movement and make for an impeccable photo backdrop! Arches of light as you enter Beirut Souks from Weygand Street Then is it the Christmas tree? Actually, this year, there are two trees gracing Beirut Souks. There’s the one ornamented exclusively of customized Coke cans to illustrate the #ShareaCoke and #ShareaCokeSawa campaigns sponsored by the beverage giant. The second one glitters with lights and belongs to Patchi. So if it’s not the décor, and it’s not the trees, what is it? What’s got my knickers in a knot? It’s the Santa booth, where young children can line up to have their photo taken with a nervous a
1 comment
Read more

Shame on ABC and Barbara Walters for Undermining Amal Clooney

Barbara Walters committed the unthinkable and the unforgiveable on primetime American television Sunday night. During a two-hour special on ABC counting down her “10 Most Fascinating People of 2014,” she handed the top spot to Amal Clooney. Now that doesn’t sound bad at all, especially as I’ve openly lauded Amal for her outstanding professional triumphs, her dignified aura and how she carried herself during her courtship to self-avowed Hollywood bachelor George Clooney. In fact, I’ve been caught many times scouring the Internet, yearning to know as much about Amal as possible, because I sense an uncanny connection with her upbringing and parcours . So why am I furious that Walters placed Amal at the head of the pack? Because she did so for heinously wrong reasons. Indeed, Walters was quite clear that Amal’s marriage to George was “one of the greatest achievements in human history.” She then proceeded to name all the ladies Clooney dated openly in the decade before he met hi
Post a Comment
Read more 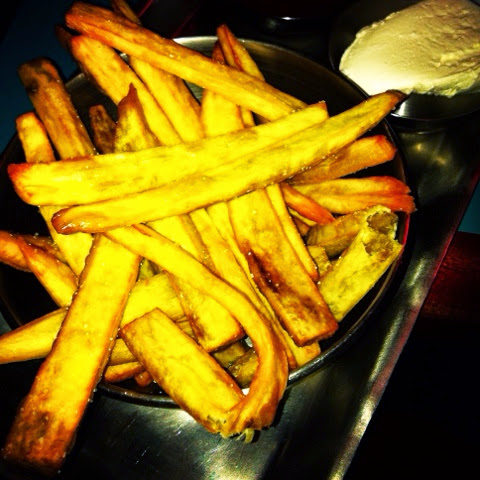 How rare is it that you stumble upon a restaurant in Lebanon bursting with fresh new flavors your palate has never before savored? How rarer is it still  that said restaurant is fun, pocket-friendly and conveniently situated in the heart of Beirut?  Welcome to Morenito Cantina del Barrio, where I guarantee you won’t find a single glammed-up burger, a spicy salmon temaki, thin-crust Neapolitan pizza, or a butter-laden steak-frites in sight. Nope, not a fat chance! This restaurant is big on Latin American flavors, with high-quality street food hailing from Chile, Argentina, Peru, and Mexico. Named after owner and manager Karim Asmar (“morenito” derives from “moreno” which means brown in Spanish—link that to “asmar” in Arabic), the space is awash with a solid color palette of cyan, magenta, and lime green. There is lower-level seating near the corner bar, as well as upper-level seating facing the open kitchen. A rectangular table with 14 barstools encourages communal dining and l
2 comments
Read more

Annette's: Heaven For All The Low-Carb Lovers! 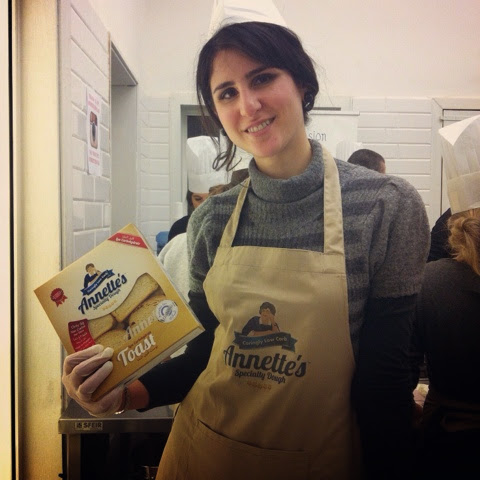 Last Friday, I was invited to participate in a unique baking experience at Kitchen Lab in Gemmayze. I’d seen postings on Beirut.com for cooking classes at this space, but I’d never been nor had I stumbled upon it in my amblings about the city. Kitchen Lab sits at the foot of St. Nicolas stairs and features over a dozen small kitchen stations where aspiring chefs can experiment during instruction sessions. The culinary school also sells kitchen utensils and appliances. That evening we gathered to meet and greet Annette. Who’s Annette? Well, she’s the mascot for a totally new and revolutionary product lineup that’s beginning to trickle in to the Lebanese food scene. Annette’s makes products that are “caringly low carb,” as its slogan goes, ideal for diabetics and the health-savvy who aim to curb their carbohydrate intake and in turn glycemic index. Yours truly! Over the past two years, an international team of nutritionists, dietitians, physicians and food technologi
Post a Comment
Read more

How PZZA.CO Defied My Expectations 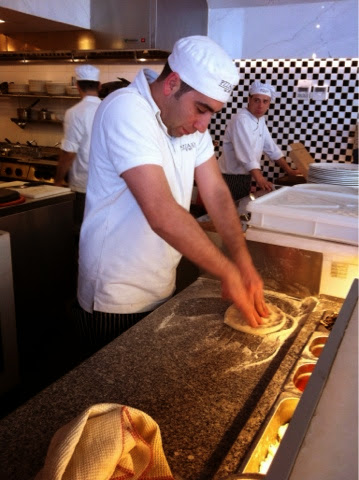 I’ll admit it. It wasn’t until last Friday that I finally warmed up to PZZA.CO. The sister restaurant to the wildly popular burger house BRGR.CO—which as of December 1 boasts two outlets in London—PZZA.CO opened its doors in April along the outer corridor of Beirut Souks. Every morning for over a year, I watched the space develop as I exacted my path from the Biel parking lot to my downtown office. How could a restaurant specializing in and excelling superlatively at flipping burgers suddenly wish to try its hands at tossing pizza dough? I was incredulous. One of the pizzaioli forms the dough into a disc I waited for the reviews to start trickling in, and my doubts only grew. Three of the featured pizzas, dubbed Hussein Hadid signatures after the namesake chef who crafted them, were priced at 42,000LL. Now I can understand that pizzerias today are reinventing their pies into high-quality street food with a gourmet facelift. But $28 for one pizza? I couldn't stomach
Post a Comment
Read more
More posts