Showing posts from March, 2013
Show all

I'll Take You to the Coffee Shop

March 26, 2013
Lebanon has become host to many a coffee shop, almost all of which have been transplanted here from abroad: Caribou Coffee, USA Coffee Bean & Tea Leaf, USA Colombiano Coffee House, Unknown Costa Coffee, UK Dunkin Donuts, USA Gloria Jean's, Australia Second Cup, Canada Starbucks, USA Aside from Starbucks and Dunkin Donuts, each coffee house has just 2-3 locations in Lebanon. All (except the in-mall locations) feature indoor and outdoor seating, to accommodate smokers. Hamra and Sassine pack in the most coffee shops per square meter: the former for its student density, the latter, for its location in the heart of chic Achrafieh. The lot of these coffee shops serve hot and cold beverages, baked goods, and light salads and sandwiches. They all offer wifi, but some in more attractive packages than others. CBTL, Costa Coffee, and more recently Starbucks, for example, give each paying customer a microscopic strip of paper noting user login info valid for up to one hour of free Inte
5 comments
Read more

The Hangout Is More Than Just A Hangout 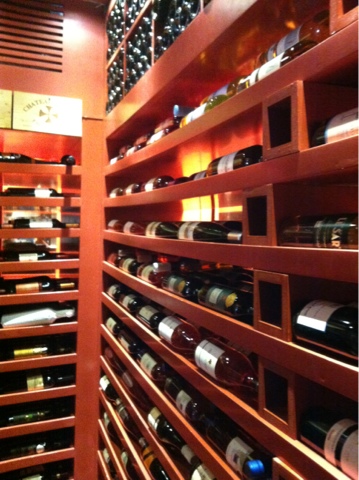 A few days ago, I had the pleasure of enjoying the tastes of Gemmayze's latest addition to the casual-chic dining scene, The Hangout . The restaurant, self-described as a grill/bistrot café, replaces its predecessor, The Porter House, in a majestic century's old residence, complete with massive foyer, high ceilings, Arabic arches, and very capacious rooms.  The space immediately puts you at ease: round red chairs with wooden trim, wooden tables, a small bar, a salad bar station, a mini library of foodie books, and an impressive wine cellar that houses close to 200 different wines, tribute to General Manager Salim Heleiwa's oenological past--he spent 16 years in Northern California's wine valley! What I particularly liked is how the restaurant, aside from its main dining room, features side rooms that can tuck away private dining parties or even a romantic tete-a-tete. Recipe for cosy! The menu is best defined as French with some continental influences. To ti
2 comments
Read more

Hamra's The Pizzeria Is Pure Delight 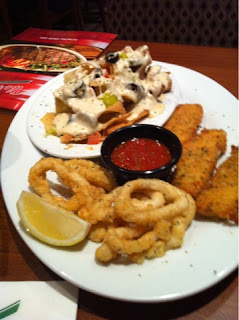 Last night, we were invited to the opening of "The Pizzeria," a casual family-style restaurant in Hamra across from Lina's and just before Zaatar w Zeit. The Pizzeria is the latest in Al Ghunaim Trading Co.'s ventures to hit Lebanon, after the swanky Indian restaurant Moti Mahal Delux and the beverage giant Coffee Bean & Tea Leaf, next-door neighbors in Zaitunay Bay. Contrary to its name, The Pizzeria doesn't focus solely on pizzas (it features four and one do-it-yourself): its menu spans everything, from nachos and fried seafood to soups and salads, steaks, burgers, sandwiches, pastas, Italian soul food, desserts, and specialty drinks. Think of it as an Italian take on Chili's, outfitted with comfy booths you can sink into as well as long wooden tables suited for family gatherings. We were received with the grace and hospitality becoming of a five-star restaurant: a warm greeting at the door before being ushered in swiftly and up a narrow staircase to
Post a Comment
Read more

March 09, 2013
As though to coincide with International Women's Day, arabianbusiness.com recently published its list of " 100 Most Powerful Arab Women ." These ladies hail from 16 Arab nations and a variety of sectors: government, science, culture and society, media, banking and finance, construction and industry, retail, sport, transport, IT and telecom, and real estate. I sifted through the list to see how countries stack up in terms of what the magazine deems "powerful woman": she who has "worked hard to become a champion in her own field and a winner in her country." Rather subjective, if you ask me. After a bit of research and number-crunching, I discovered the following: UAE has the highest number and proportion (by country population) of these divas, 23 from a country of 5.47 million people. Saudi Arabia follows with 15, but their population is vaster, at 26.9 million. Lebanon offers up 12 of its own women, from a pool of 4.13 million. Here are the numbers
Post a Comment
Read more 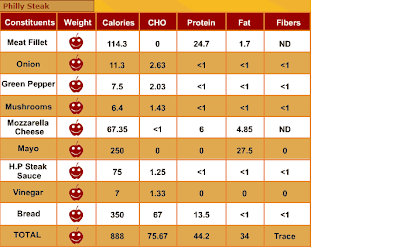 As youngsters, my brothers used to rave about Bliss House. The burgers and submarines, stuffed with sizzling meat and globs of sauce, left little to be desired. John Paul, the youngest, swore so religiously by the joint that, upon leaving Lebanon at summer's end, he would stow a Bliss House menu in his luggage to take back to California. Nearly every day for the following year, he'd pull it out of his drawer, admire photos of the food items, smile nostalgically, and then restore it to its cherished hideout. Summer couldn't come fast enough. Today, over a decade later, Bliss House is still all hustle and bustle, with seven branches in Lebanon and several more across Saudi Arabia and UAE. They specialize in burgers, submarines, sandwiches, and juice cocktails, but they are particularly notorious for their Philly Steak and Chicken Fajita. Therefore, when Gosawa ran a 50% off promotion  on Bliss House just yesterday, it came as no surprise that within the first few hours, th
Post a Comment
Read more
More posts