Showing posts from April, 2013
Show all

April 27, 2013
Today, deals site  goSawa announced its latest rewards scheme : Purchase deals Get 2 points for every $1 spent Use points to redeem rewards There are 16 available gift options, ranging from a 2000-W Tchibo hair dryer to a half-hour horseback riding adventure. Mathematics geek that I (self-professedly and unabashedly) claim to be, I wanted to understand the logic (if any) behind the number of points required per gift as a function of its retail value. Luckily, goSawa made the job of hunting down retail values easy, as every single one of the gifts on offer (except item 14--see below) was run as a deal in the past, and a quick Google search could unearth it. Here's a preliminary list: Item Reward description Points required   Deal price ($)     Value ($)   Points/ dollar (deal) Points/ dollar (value) 1 30-minute horseback riding adventure 1000 11 22 91 45 2 1-month dance lessons 1500 10 75 150 20 3 3-hour bike rental 600 5 10 120 60 4 1-hour Waterfront Segway renta
1 comment
Read more

1. LibanPost's speedy parcel services Last Saturday morning, I mailed a letter to Geneva, Switzerland, through LibanPost's standard mail. It cost me 5,000LL. The addressee informed me this morning that she received the letter, which means that the delivery time was a mere four days (three, if you don't count Sunday)! I am extremely impressed. That's about as fast as domestic parcel services in the US! Now if only Lebanon streamlined every one of its infrastructure, where would we be... 2. [Grid]'s gourmet cookies I haven't sampled a finer cookie east of the Mississippi, far to the east that is... The decadent double chocolate with morsels of walnut is baked to the threshold of crisp: as you attempt to break off a piece, it gently gives. Dunk it in American coffee, and you've recreated paradise. The oatmeal-cinnamon cookie with sultana raisins is equally divine yet softer and less dense. 3. Grain-based salads I know I'd bashed
Post a Comment
Read more

I don't think it's mere coincidence how eerily similar these logos are:  Red circle with overlaying white text, black trim with white text around the perimeter. I believe Antelias' bowling alleys at The Link predate Latest Version Diner (what kind of restaurant name is that anyway?).       The eponymous title of Lebanese artist Wael Kfoury's latest album is typed in the same font as that of the iconic movie series "The Godfather." Compare the letters 'a', 'e', 'f', 'o', and 'r'. Unmistakably identical.       They couldn't be more indistinguishable. Blogger Gino Raidy points this out here . But it looks like The Burger Bar's days are long gone--it's singular location in Sodeco closed a while ago.
Post a Comment
Read more

April 17, 2013
Boston was my home for two years, while I attended graduate school at MIT. In fact, Boston symbolized my first real departure from the nest. (A summer session spent in Sussex, England, doesn't count, nor do my two years living on campus at UC Irvine: I always came home on weekends.) I moved across the country, from one coast to another, into a different timezone and a more picturesque climate. I picked MIT because I fell in love with Boston. The density of the student population; the patriotic feel of the city; the impassioned identification with sports and good international fare. I experienced my first proper autumn in Boston, entranced by the changing colors of the foliage. It was here that I learned to appreciate inventive ice cream flavors (like Toscanini's burnt caramel), whoopie pies (at Whole Foods), and Boston creme pie (at Legal Sea Foods). It was here that I felt the cold, choppy waters of the Atlantic--yes, frigid even at the height of summer--lap at my feet. W
Post a Comment
Read more

Le S.T.A.Y. and Sweet Tea Are No More

It'd been some time since we'd last indulged in the heavenly French pastries of Sweet Tea in Beirut Souks. The other day, we noticed a new menu posted outside the salon de thé--it was mystically more comprehensive, with many savory offerings, in addition to their traditional sweets--and we ventured in. Everything looked the same, except prices had been slashed, and considerably so at 25% off across the board. Our friendly hostess and waitress, with whom we were well-acquainted from previous visits, explained that Sweet Tea is now The Garden. Apparently, Michelin-starred chef Yannick Alleno, the mastermind behind Sweet Tea and its sister restaurant, Le S.T.A.Y., has sold the concept to the same chef who launched the urban coffee shop [Grid]. The good news is that the entire dessert proposition will remain intact. Sure enough, the tarte tatin and Religieuse were exactly as we remembered them, if not more generous (and both at 6,000LL instead of 8,000LL and 10,000LL, respectivel
Post a Comment
Read more 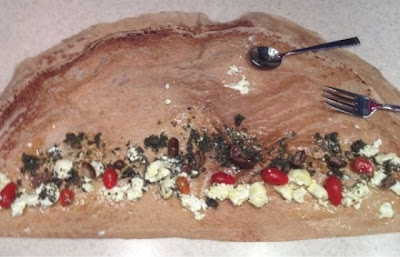 My favorite food blogger and perhaps the gourmet who inspired my own food fetish is actually in Beirut! David Lebovitz was formerly a professional pastry chef in San Francisco who left the restaurant business in 1999 to pursue book writing. He has lived in Paris for nearly a decade now and blogs about his foodie experiences on his eponymous site . Suffice it to say, its readership is huge. David has already blogged about how mesmerized he is with Lebanese breakfast , particularly the white cheeses, jams, zaatar, pickled veggies, and warm bread (he's lodging at the Four Seasons, so his experience is a bit more glamorous than the day-to-day fare), but he's also sampled the la7me b3ajjin at Ichkhanian Bakery in Zoukak el Blat, which I can vouch for. Looks like David is here for a week with fellow food blogger Bethany Kehdy , who is leading a food trek as part of her enterprise Taste Lebanon . David is also headed to Tawlet , Souk el Tayeb's iconic restaurant which featur
Post a Comment
Read more
More posts