Beirutista is a treatment of the cultural and lifestyle nuances in Lebanon as seen through my multicultural lens. Topics range from analysis and humor pieces to restaurant reviews, foodie discoveries, rants and raves, travel guides, general news, views, and memoirs.


(3) I appeared on LBCI primetime news on March 31, 2017, subsequent to having ranked #8 worldwide for the Bab.la Bloggers Abroad international competition. That segment is viewable here, cue 13:58 - 16:38.

I was interviewed by An-Nahar newspaper, and my writing was featured in both print and online publication. (January 2014)

I was interviewed by The Daily Star newspaper for my insights into the food and beverage sector in Lebanon and how it is evolving. (January 2015)

I was interviewed by Wamda (an entrepreneurship accelerator across MENA) on diner behavior in light of Lebanon’s food scandal and the evolving digital space. (August 2015)

I was featured in health & fitness blog Le Gym Online for my secrets on staying slim in spite of being a food blogger. (September 2015)

I was interviewed by MediaSource on the origins of my blog and the impact of blogs on Lebanon's dining scene. (April 2016)

For three years, I served as the premier Brand Ambassador for Wesley’s Wholesale, a megastore specializing in American and international food and nonfood imports. I featured product reviews and leaks, hosted giveaways, and documented cool new projects Wesley's pursued. 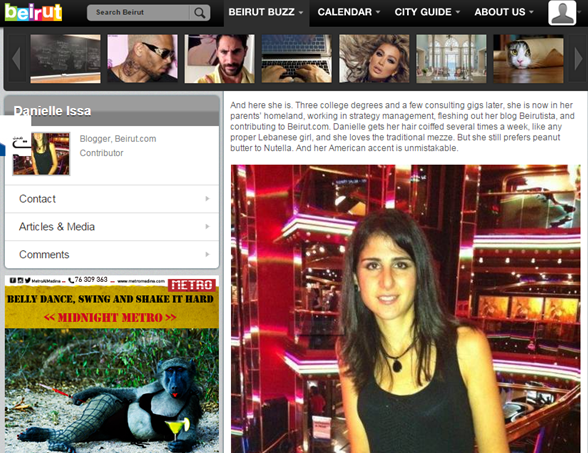 For nearly a year and a half, I served as Food & Drink Editor of the online social magazine Beirut.com, authoring 157 articles (accessible here), including 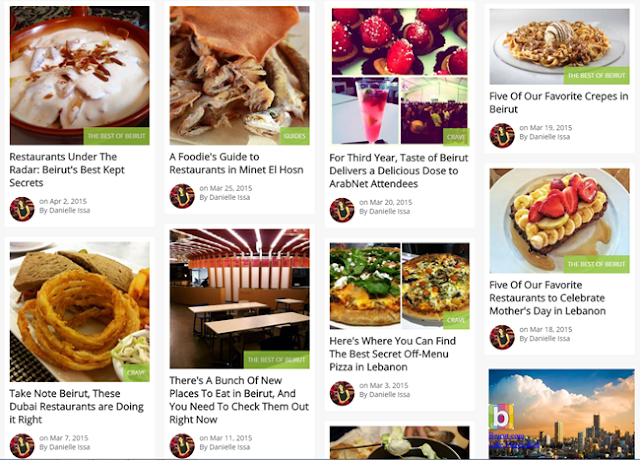 As resident expert of Beirut's foodie scene, I built a comprehensive database that acts as a tool for both locals and tourists alike. (December 2013 - March 2015)

Featured on Flipboard and Limelines.com

Beirutista is featured on Flipboard and Limelines, both of which specialize in international and regional news and social network aggregation.

Regional Expert for International Guide to the Best Pizzerias

I was sought out by the famous international food critic Daniel Young to serve as regional expert in Beirut on an insider's guidebook called "Where To Eat Pizza," published by Phaidon in March 2016.

In early 2016, the Prince Claus Fund for Culture and Development solicited my input on the work of Lebanese chef and food activist Kamal Mouzawak, founder of Lebanon's organic food movement, Souk el Tayeb, and the producer's kitchen Tawlet.

Kamal Mouzawak along with five other award-winners went on to be selected as a Prince Claus Laureate and was honored at a ceremony in Amsterdam in December 2016.

The Bab.la Bloggers Abroad Competition aims to discover the best online resources about traveling and life in a foreign country. 2017 marked the ninth edition of this contest, compiling 100 participants from all continents. After a week-long voting process, Beirutista came in 8th place, a huge honor considering this is an international race.

Bab.la is an interactive language portal and an online magazine for expats offering bilingual dictionaries, blog articles about life abroad, language quizzes, and language games, all for free. Bab.la was founded in 2007 and since 2015 has been part of the Oxford Dictionaries family at Oxford University Press.