Olivos at the Radisson Blu: Fine Mediterranean Cuisine Where You Least Expect It

February 17, 2014
Every so often a restaurant comes along that totally knocks you off your feet. I’m not referring merely to good food, but expectations far surpassed. You harbor little or no prospects, and then the restaurant not only pleases but surprises you with its flair. Yesterday was one such rare experience, at Olivos inside the Radisson Blu Martinez hotel in Ain Mreisseh.
We arrived at 2.15pm on a Sunday afternoon to a spacious dining salon. The Mediterranean restaurant doubles as an atrium, with rays of sunshine streaking in to the center of the room, and dimmer, tucked-away seating on the fringe. We seated ourselves just as a shy waitress peeked out from the kitchen and hastened to our side. Moments later, a very friendly restaurant manager named Nabil made his way over, welcoming us to Olivos and promising a very pleasant lunch. 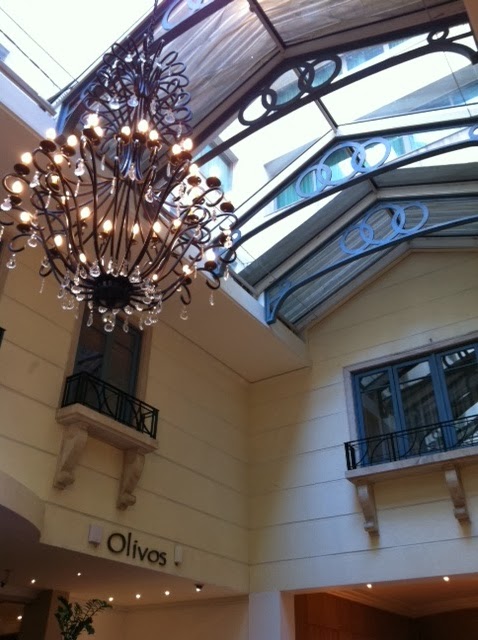 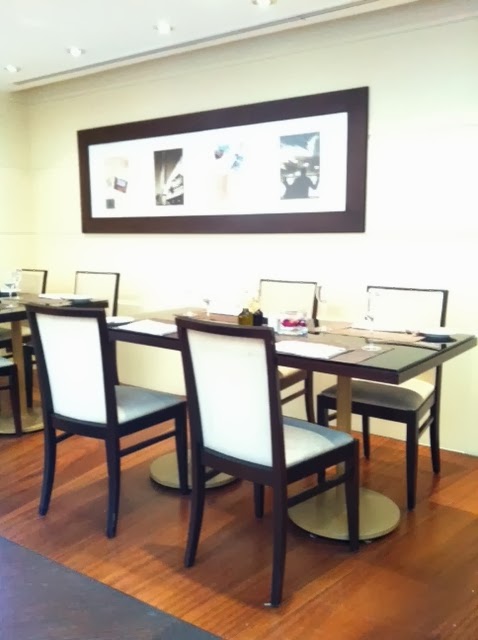 While we pored over the menu—which features 9 appetizers, 8 mains, 6 pizzas, 4 pastas, and 4 desserts, followed by an Arabic mezze offering—the waitress Jane presented us with a colorful plate of crudités, homemade cocktail sauce, and the essential bowl of mixed nuts. Cucumbers; carrots; red, yellow, and green bell peppers; cherry tomatoes; and green and black olives were all on offer, quickly becoming indispensable vehicles to transport the flavorful, caper-rich dip into our beckoning bocas. An assortment of soft, warm bread rolls arrived to the table, and a bowl of olive oil and balsamic vinegar, made especially for Olivos, was prepared before our very eyes. 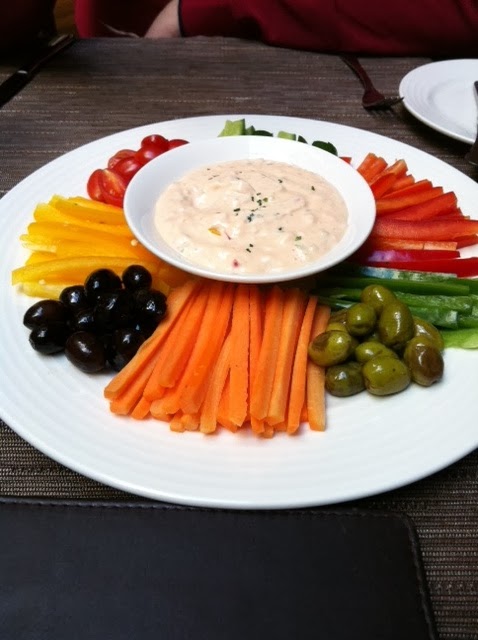 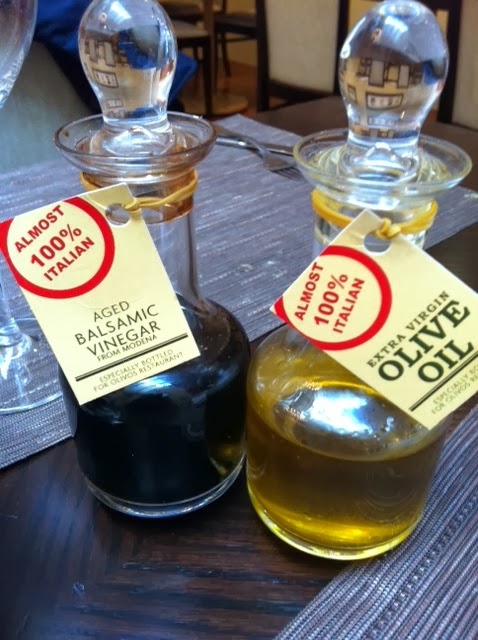 We could hardly tear ourselves away from such a generous presentation of amuse-bouches, but at Jane’s gentle prodding, we studied the appetizers carefully and selected a carpaccio of beef (25,000LL), aubergine rolls (13,000LL), and chargrilled asparagus (13,000LL). We started with the aubergine, four thinly-shaved slices of sautéed eggplant wrapped around a slightly-sweet tomato puree and drizzled with balsamic reduction. The plate came decorated with baby rocket leaves, thick shavings of parmesan, and roasted cherry tomatoes, all of which combined to give this dish an impeccable marriage of flavors. We were so mesmerized by how dizzyingly tasty the first entrée was that we dived right into the asparagus. Green, crunchy stalks of grilled asparagus accompanied by a poached egg and Pantelleria capers came slathered with a creamy herbs sauce. A delicate poke at the egg and the liquid yoke spewed out, forming a lake of yellow in which to swirl the asparagus. The bread proved mandatory to soak up all the juices. The carpaccio featured five large, thinly cut circles of air-dried beef arranged around a mountain of chilled, sautéed mushrooms in the middle, garnished with baby rocket leaves and drizzled with olive oil and balsamic reduction. Scooping mushrooms into envelopes of deli, we quickly obliterated the last of the entrées and washed them down with a glass of local Clos St. Thomas red wine. 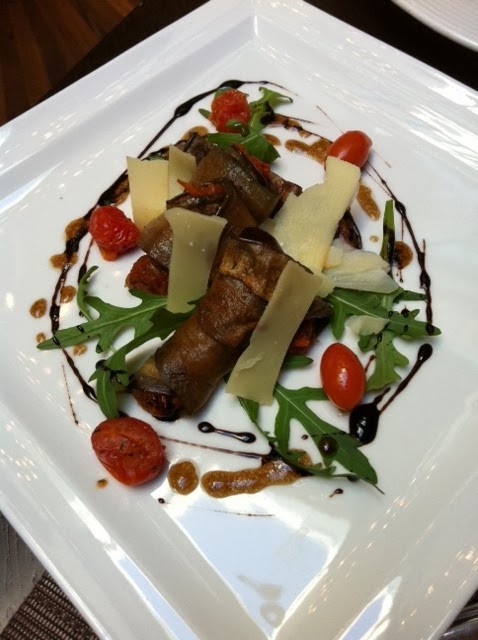 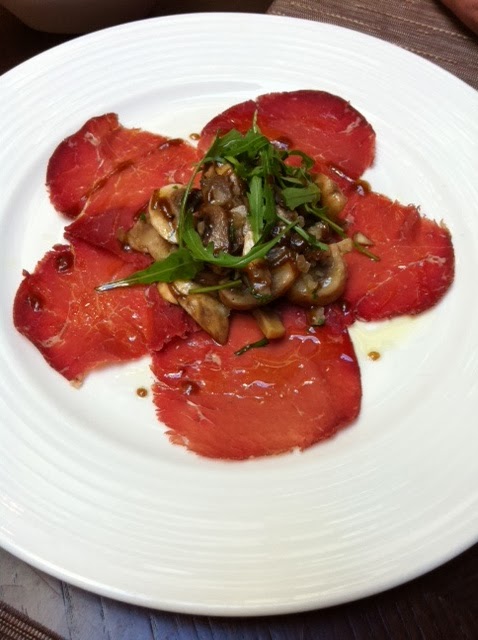 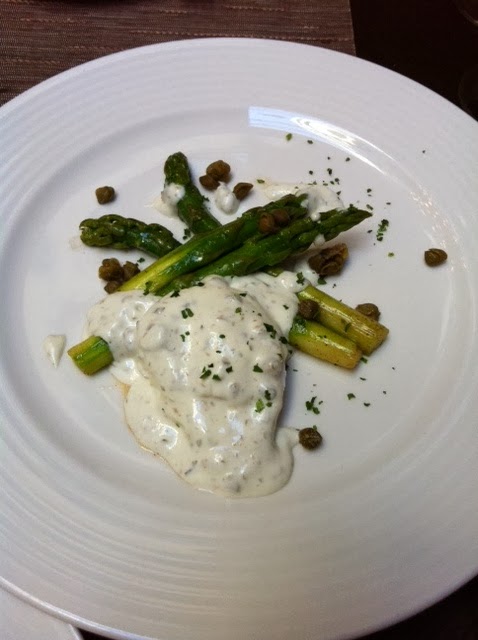 As we debated what mains to order, the chef emerged from the kitchen to introduce himself at our table. Mr. Palash Gomes originally hails from India but worked over a decade in the Gulf, followed by another decade in London before making his way to Lebanon’s shores just a few months ago. His passion for cooking and creating were unmistakable, putting us at ease to be at his culinary mercy. So without hesitation we ordered the recommended lamb shank and rib-eye steak (each 44,000LL). While we waited, Jane brought us palate cleansers in the form of lemon sorbet nestled inside champagne flutes, truly an emblem of a refined dining venue. 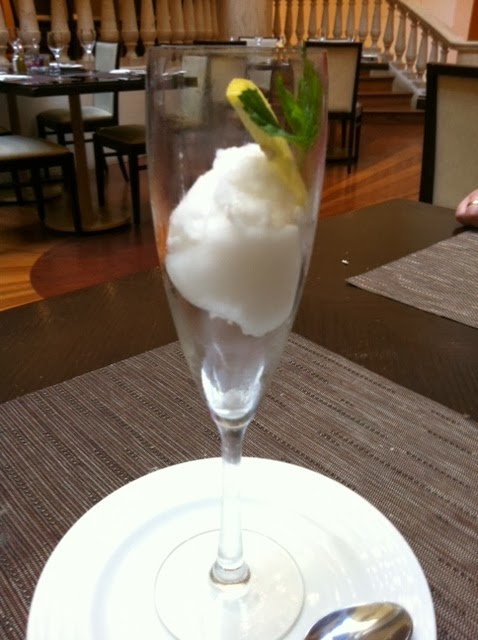 Several minutes later, our mains appeared. The steak, requested medium, was cooked well done but still retained the elemental tenderness requisite of such a slab of meat. It was adorned with sautéed bell peppers and onions, grilled cherry tomatoes, black olives and balsamic reduction—clearly the chef’s signature ingredient. The lamb shank, which resembled more a leg of lamb, as ‘twas so big, rested atop a purée of mint-flavored celeriac and mashed potato, an ode to the chef’s British training. It was offset by sweet sugar snaps and roasted cherry tomatoes with red currant jus. The lamb is by all counts a hands-on endeavor, requiring you to pull back the skin and fat to uncover the tender meat inside. But the contrast of flavors, spices and textures is absolutely tantalizing, justifying every ounce of labor and effort you must put forth. 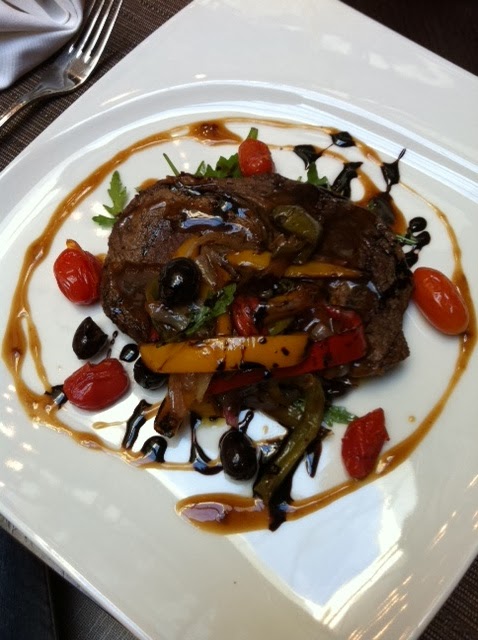 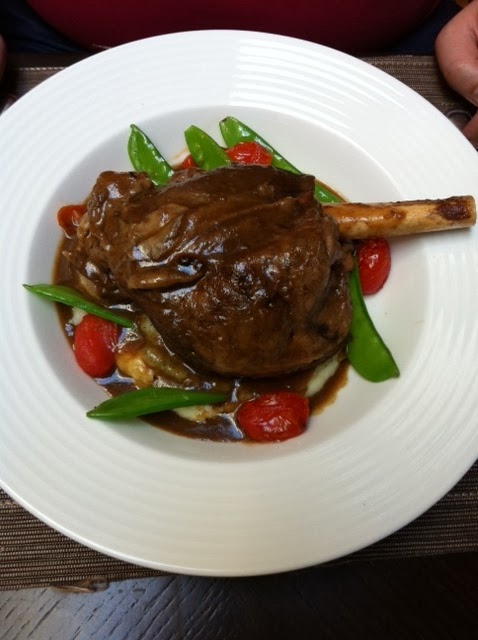 Dessert at this point seemed superfluous, but we were so smitten with the chef’s original and delectable creations that we couldn’t resist. The chocolate fondant (9,000LL) was warmed to a gooey consistency and cradled a scoop of pistachio ice cream, but not just any pistachio—I am convinced it’s the Indian novelty pista kulfi, a dense frozen dessert similar to ice cream but taking longer to melt. The tiramisu (14,000LL), served in a margarita cocktail glass but ironically devoid of this dessert’s iconic rum, had a heavy layer of mascarpone coated with finely-ground coffee beans. A solitary lady finger rested on the plate next to a dollop of whipped cream, a halved strawberry, a cluster of gooseberries, and fresh mint leaves all dusted in confectioner’s sugar. Here, too, as in the savory dishes, the chef’s presentation was distinct and alluring. 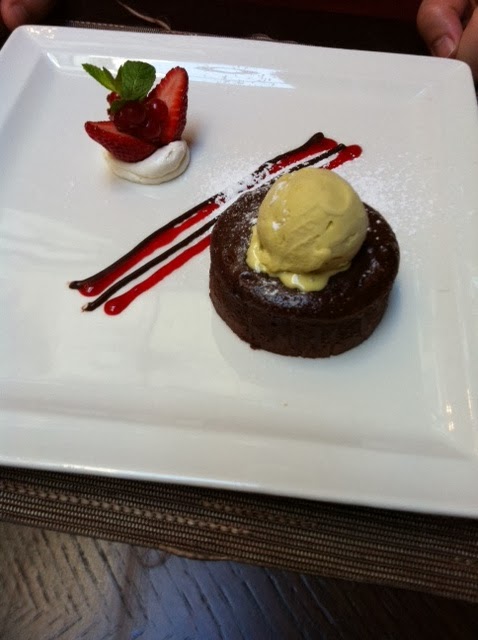 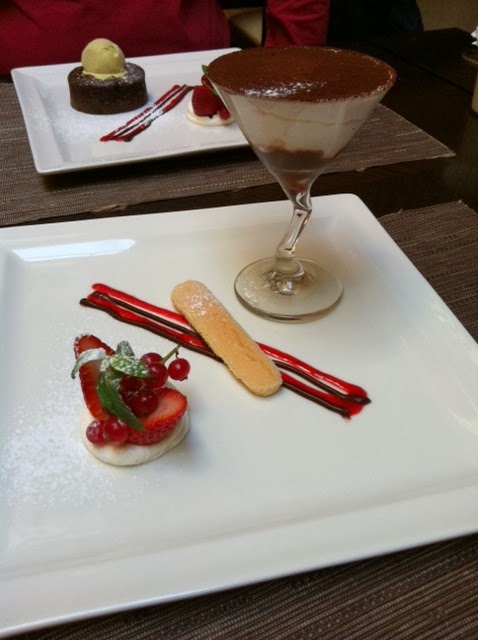 Our meal was truly a five-star affair in a place you’d least expect it. Sure, the Radisson Blu is a reputable, four-star international establishment with locations the world over, but I didn’t imagine Beirut’s would be a hidden gem housing a masterful world-trained chef, doting service, and innovative dishes. If you’re after excellent cuisine and first-rate hospitality in calm and composed vibes away from the “see-and-be-seen” airs of Beirut’s posh hotels, then Olivos at the Radisson Blu is your certain paradise.

Note: our lunch was graciously extended to us by the hotel.
food rant 'n rave restaurant