Eight years ago, I stumbled across Furn Beaino while researching Lebanon’s acclaimed "lahm baajin" bakeries. At the time, I was freelancing as Food & Drink editor at Beirut.com, and “best of” roundups were my bread and butter. Furn Beaino kept surfacing again and again in the literature, so I had to go and see what the fuss was about.

I still remember that first visit in late September 2014. Wissam Beaino, son of the furn’s founder and visionary Toni Beaino, greeted me and briefly recounted the history of his family’s enterprise. Established in 1975, the furn, Arabic for "bakery," had quickly risen to fame for its matchless lahm baajin, a fragrant blend of mince lamb, onions, and tomatoes spread richly on a thin round flatbread, baked swiftly at high temperatures, and finished with a drizzle of lemon and a dash of pepper. These meat pies were Furn Beaino’s signature item, but customers clustered at the small Jounieh stronghold for everything from manakish zaatar to spinach pies. The unifying motifs? Quality. Generosity. And excellence.

I was enraptured. I came back to meet Toni, the legend himself, and shadow him in the kitchen as he walked me through his daily routine, which started every morning at 3:30 AM. I also crossed paths with Samer, Toni’s younger son, who doubled as manager and cashier. And over the years, I’ve fondly watched the operation expand from a solitary kitchen in Sarba to two central kitchens – one in Zouk, the other in Bauchrieh – to serve the greater areas of Keserwan and Beirut, respectively.

The menu has amplified considerably, featuring wraps, salads, pizzas, and dessert, in addition to the original manakish line-up. And the food? Absolutely sublime. The wraps are colossal, bundling premium ingredients inside a supple round bread measuring 30 cm in diameter. Salads are copious and refreshing. Pizzas are thin-crust and pleasing. And desserts incorporate authentic Belgian chocolate and fresh fruit.

Today marks another huge milestone in the timeline of Furn Beaino’s evolution. It is the day Furn Beaino inaugurates operation beyond Lebanon’s borders. They’re launching a cloud kitchen in Dubai for the purpose of preparing food for delivery or takeout only. Orders can be placed via the app (both iOS and Android), and couriers will initially include Talabat, Smiles and Zomato.

No doubt Lebanese expats residing in Dubai will bask in the knowledge that the premier lahm baajin specialist from Lebanon has nestled in their own neighborhood. Strong brand recognition will surely help Furn Beaino spread its wings in the Emirati city. And hopefully in little time, the storied restaurant will tap into a totally new customer base that will have the privilege and pleasure of feasting on Lebanon’s finest fast casual food.

If you’re in Dubai, give them a try and invoke my good name in your praises! 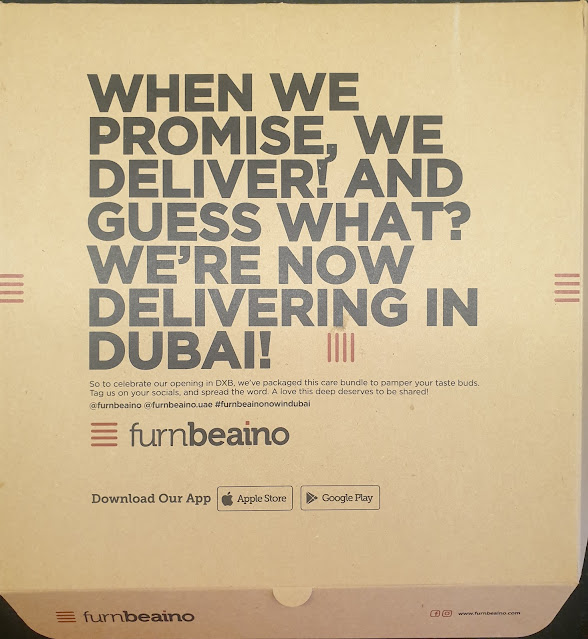 Enjoyed this post? Never miss out on future posts by following Beirutista here.