My culinary adventure in Boston

November 22, 2012
I hadn't been back to Boston since I graduated in June 2009. I'd always smiled upon my memories of the city, as it marked my first brush with urban life, a taste of Europe in America, and the appreciation of four distinct seasons.

As a student, I hadn't had the time to indulge in Boston's food scene, so coming back, I had a few items on my list that I was keen on trying. John Paul, my brother, also added his contributions to my local food tour, and in all it was a happy medley of comfort food.

The night I arrived, John Paul took me to Amsterdam Falafel, a fast food joint where you self-assemble the toppings of your falafel sandwich. The falafel balls are true to the Lebanese variety I'm familiar with, but the assortment of dips and veggies were rather unusual of a falafel sandwich. You could of course choose the traditional tahini sauce, along with pickled horseradish and chopped parsley, but there was also hummus, pureed eggplant, sauerkraut, tzatziki, pickles, olives, and beets with red onions in vinegar. It's a very international falafel, and you easily risk overwhelming the flavor of the chickpea-fava bean duo if you overdo the toppings. A cone of fries split between us completed the meal. 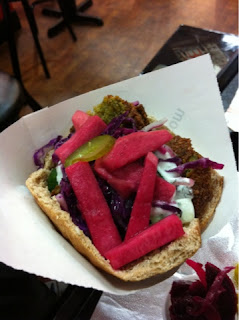 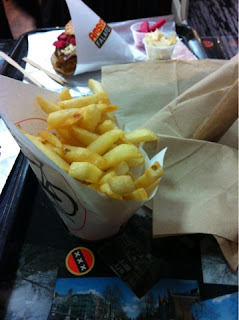 I was craving a buckwheat crepe--or galette, as the French refer to them--because they can't be easily had outside of France. After scouring the web for Boston's favorite crepes, I finally found Paris Crepes on Coolidge Corner, not far from Boston University, a hole in the wall that proffered me that savory crepe I was after. I opted for the traditional--gruyere cheese, turkey, olives, mushrooms, and spinach--and would have easily wolfed down a second had I not had to run off to a rendezvous in Harvard Square. 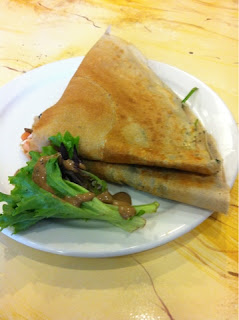 Pastrami and corned beef were next on my list, and while I found a tourist favorite by the name of Sam La Grassa's, I shun tourist traps for their generally undeserved hype, inflated prices, and long lines. I stumbled upon Jacob Wirth, a classic European brasserie with strong local influences, reputed to have been around since 1868! I took along two friends from MIT for a long trek through Boston before falling upon the restaurant, which was tucked between Boylston and Chinatown. The chairs and tables are wooden, and the bar runs the length of the very long restaurant. Guests are almost exclusively locals, and many come for the German fare and signature sandwiches. We ordered a plate of beef-and-bean chili nachos to share, a corned beef sandwich on dark rye, and a pastrami and swiss on a French roll. We helped ourselves to the delicious corn bread offered to us as we waited. I much preferred the corned beef to the pastrami, as it was soft and succulent, whereas the latter was rather tough to bite through. The nachos came generously smothered in grated Swiss cheese, olives, and chili peppers, with sides of guacamole, sour cream, and pico de gallo. I didn't even get to my side of sauerkraut, as the servings were definitely American and therefore, definitely endless. 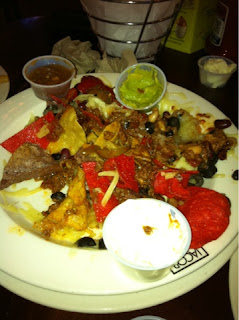 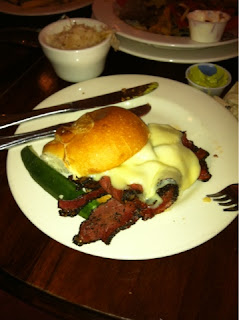 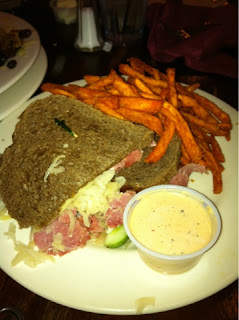 A tour of Boston would have been incomplete without a visit to a brewery, and we found ourselves at Harpoon's on a chilly Sunday around noon. For $5, we were given an informative tour of the brewing grounds, established in 1986, as well as unlimited samples to the 12 different types of beer on tap. There were varieties as eclectic as Chocolate Stout, UFO (unfiltered offering) raspberry, and coffee, as well as the more traditional dark, cider, and India Pale Ale. Of course, downing these bubbly treats on an empty stomach only made our desire for pizza all the more vicious, and we rushed over to Pinocchio's at Harvard Square for a student favorite--Sicilian pizza baked in deep dish pans, a bit on the greasy side, but nevertheless delicious. 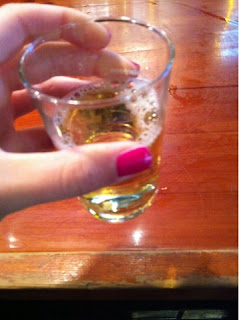 I had a slice of tomato-basil and another of spinach, while John Paul's carnivorous cravings led him to the sausage and pepperoni offerings. A dash of cracked pepper, and we were set. 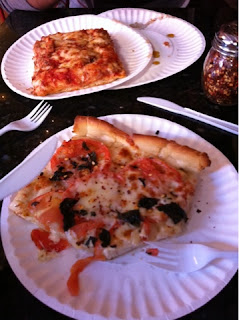 I've never been wildly courageous with East Asian cuisine, so for dinner one night with John Paul and his friends at Pepper Sky's in Central Square, I ordered a chicken wonton soup. It was a very simple affair, rather large and hearty, but simple: spinach, broccoli stalks, noodles, chicken, and a few crispy wonton shells on top. 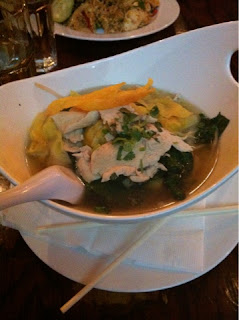 In the way of desserts, I slowly made my way through an apple-walnut-cinnamon bread pudding at Flour Bakery on Massachusetts Avenue, just a block down from MIT. I love the apple-cinnamon combination, but the walnuts were an obstruction in the soft, crumbly texture of the cake--I am not a fan of contrasts in hardness. 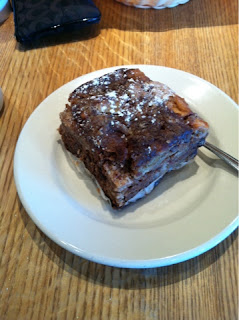 Perhaps my most memorable--and self-fulfilling--meal was on my last day in Boston, when I came up with the idea of a homemade pastrami sandwich as I was rummaging through John Paul's fridge. I melted Emmental on one slice of white bread, spread mashed avocado on another, and proceeded to pile on a couple slices of deli-cut pastrami and salami, vine-ripe tomatoes, lettuce, and a dash of black pepper. A dab of mustard at the very end did the trick. 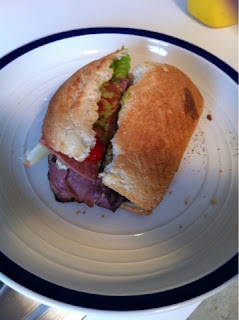 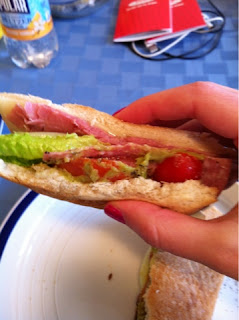 For my sweet tooth, I cut into chunks a massive chocolate muffin I'd bought from the supermarket, chopped up chilled strawberries for a tart contrast, and topped the treat with lite whipped cream. The taste was enviable. Who ever said student food has to be miserable? 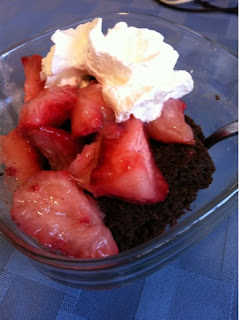