January 02, 2013
I always anticipate New Year's with both eagerness and anxiety. How wonderful it is to make it to the start of a fresh new year, with promises of adventure and challenge, but how unfortunate that the end of the holiday season has drawn near. With Christmas as the opening act, New Year's is the irrevocable finale.

As a child, Christmas was my favorite holiday. The few weeks leading up to it, presents would magically appear beneath the tree, maybe a few each night, until by Christmas Eve, a mountain of gifts had formed. We'd tuck our fingers into the wrapping paper to try and feel the enrobed objects. In successive years, Santa got smarter--either the wrapping paper would be firmly taped at every gap, or gifts were concealed in boxes, preventing the penetration of our little fingers. But as excited as I'd be for Christmas morning, when all the goodies would be unmasked, I was ambivalent. I feared the end of all that was warm, cheerful, and cozy. Radio stations would immediately stop playing Christmas tunes. Stores would hasten to liquidate their Christmas inventory to make way for Valentine's Day. Buildings would be stripped of their red, silver, and gold facades. Even our neighbors would dispose of their Christmas trees as early as December 26th, whereas we kept ours at least through Epiphany and often into late January.

The rather rushed denouement of Christmas troubled me, but I'd be consoled with the hope of New Year's Eve festivities. Though largely muted next to Christmas, New Year's would witness Santa making a second appearance, bearing a gift each for me and my brothers. We'd also receive freshly minted dollars as a token of good luck, and it was the one night of the year my parents would let us stay up to watch television as late as we desired. In the morning, I'd crawl surreptitiously into the living room, as the rest of the family lay nestled in bed, to watch the Pasadena Rose Parade on TV.

And then it was over. Schools started immediately the next day, and with them a fresh new slate of homework, projects, and exams. We'd be back to the grindstone. Almost as quickly as they had come, the holidays ended, and we were left with nothing but the winter cold.

Christmas in Beirut has been rather refreshing. Perhaps it's because I'm no longer a kid (ostensibly), my focus has shifted from presents to warm gatherings and good food. I love slowly making my way in the signature food store downtown, sampling French cheeses and German charcuterie, carefully selecting a bottle of terroir wine, salivating at the dessert displays boasting the seasonal Mont-Blanc aux marrons. The decorations, too, promise to linger well into the month. And Santa is still taking photos with kids downtown in "Santa Land."

The beautiful thing about Lebanon is that even with the holidays officially behind us, every day is an excuse to indulge. Here, you never need an occasion to celebrate friends, family, good food or cheer. And I'm raising my glass to that. Happy 2013! 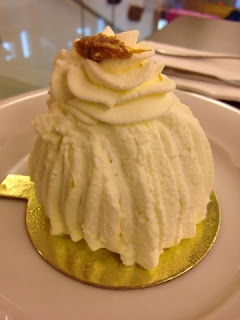