July 01, 2013
At the movie theater on Saturday, I hesitated between "White House Down" and "Monsters University." The ticketing agent behind the counter recommended both but warned that "Monsters University" was more suitable for teenagers. Challenge accepted, I thought to myself. A lot of people still mistake me for a kid.

The prequel to the Pixar hit "Monsters, Inc.," the movie follows little Mike Wazowski (played by Billy Crystal) as he aspires to fulfill his childhood dream of becoming a "scarer." During his first semester at Monsters University, he commits himself wholeheartedly to mastering the documented fright-inducing techniques and excelling in his coursework. He slaves away in the library and buries himself in his books, while his more popular and ponderous classmate and anathema James "Sulley" Sullivan (John Goodman), who comes from a family of prominent scarers, uses his innate charm to get ahead.

The Dean of the School of Scaring, Dean Hardscrabble, has made it her mission to distill the scary from the merely shocking, and she has no high hopes for Mike. In fact, during the semester's final exam, she eliminates Mike and Sulley permanently from the Scaring program because of a brief scuffle. Rather offensively, she dismisses Mike as not having it in him, and of Sulley, she bins him as a shame to his family name. The two rejects strike an unlikely alliance and eventual friendship that they put to the test in a concourse of challenges called the Scare Games, which if they win will allow them to be readmitted into the School of Scaring. Mike and Sulley partner up with the Oozma Kappa (OK) fraternity, because a team of at least six is requisite for participation.

While Sulley doesn't believe the team can succeed, Mike slates up intensive training exercises to prepare them for the games. Miraculously the team advances to the final stage, but in order to guarantee victory, Sulley clandestinely rigs the scream-o-meter so that Mike attains a perfect score. The sweet taste of success is brief, for Mike discovers Sulley's manipulation and his emotions tank. To prove he is indeed scarer material, he breaks into a doors lab, where he crosses a threshold into the human world and attempts to scare kids at a summer camp. He fails. Meanwhile, Sulley has confessed to Dean Hardscrabble of his misconduct, and after he learns of Mike's break-in at the doors lab, he rushes to his succor.

Sulley and Mike combine forces to scare not only the kids but their adult-age camp counselors, and the screaming energy they register is off the charts. Nevertheless, once back in the real world, though Dean Hardscrabble finally nods her head in approval at their performance, she expels them from the university.

This denouement is probably the first that is not the predictably lame, wishy-washy, fairy tale ending to a Disney movie or any major motion picture for that matter. I was supremely impressed, for I'd been expecting the winning duo to be quickly reintegrated into the university where they'd go on to achieve stardom and finish their education. That would have been the traditional and safe path. On the contrary, Mike and Sulley drop higher education altogether and get jobs in the mail room of Monsters, Inc. In fact, the final scenes of the movie show them slowly climbing the ranks from mail boys to certified scarers, one humble step at a time (they even serve as kitchen help at one point!).

And thus, "Monsters University" delivers major life lessons to all young viewers: you don't need an institution to nurture your talents, nor is an institution necessarily the stepping stone to a successful professional career. The recipe to real and lasting success is part hard work, part talent--the two coupled together yield phenomenal results. And finally, never let a cynic or naysayer deny you the right to dream. Fans can be born out of skeptics, but the reverse is never an admirable thing. 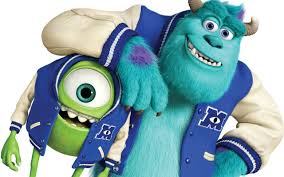