Fed Up With the Lebanese Restaurant Culture

November 20, 2013
I never thought I’d say this, but frankly I've tired of the restaurant scene in Lebanon. It seems that this country has become enamored with food, dining out, and little else. Restaurants are popping up anywhere a vacant space shows its face. In a six-month span of time, BIEL hosted two major food expositions, Horeca and the Beirut Cooking Festival. And in case we haven’t gotten our fill, this week will witness “Le Festival de la Gastronomie Francaise”. Local magazines, too, seem to be in pursuit of one aim--Beirut's best burger--and my blog feed is constantly inundated with new restaurant reviews. The bombardment of new restaurants from every angle is starting to lose its charm. I can’t keep up.

Has anyone else paid attention to the upsurge of French bistros lately? Couqley can probably lay claim to introducing this restaurant niche to Lebanon in 2010, but this year has really seen its fair share of newcomers: Prune in Mar Mikhael, Au Bistrot de Michel in Achrafieh not far from Sassine, Bar Tartine and Sud nestled in La Cour Saint Michel. Sadly, three fine institutions (which appeared on food blogger Anthony Rahayel’s “Top 10 French Bistros in Lebanon” in 2012) are no more: Coquelicot, Paname, and Amarrès. The first two were just a few hundred meters from each other along Rue Gouraud in Gemmayze, and the last was the seaside Couqley on restaurant row in Zaituna Bay. I’d dined a few times at both Paname and Amarrès, and I can certainly vouch for the fresh, original and tasty creations they dished up. Such a pity they had to close their doors to business, which can likely be attributed to restaurant saturation and locals’ thinking twice about eating out in this limp economic state. Their shuttering won’t be mourned for long, though, thanks to the sprout up of other venues with identical concepts and similar menus.

Don’t get me wrong—I’m a self-professed gourmet who loves good food just as much as the next person. I enjoy transposing my culinary experiences into animated reviews, as no doubt you’ve frequently seen on my blog. But when a myriad of restaurants are closing and another myriad plus some are opening in their stead, I can’t help but wonder why we’re fueling this vicious cycle.

In just the past few months, these restaurants have shut down: Chenbao, the upscale Chinese restaurant in Saifi Village; MBCo, the Canadian bistro inside Dbayeh’s Blueberry Square, which didn’t even make it to the one-year mark; Hot Dog & Beyond, which attempted to glamorize hot dogs—clearly impossible; Salmontini in Achrafieh; Fiore in Mar Mikhael; and innumerable others. One restaurant in Saifi Village has even gone through three christenings: first it was Le Lutecia, then Les Gourmet des Ternes, and now it’s Alesia. As if the name will dictate its profitability.

I concede, some restaurant debuts in Lebanon do bring novelty and freshness to the table, and their high volumes of customer traffic prove it. Le Hanoi serves delectable Vietnamese food crafted by a proper Vietnamese chef who worked for two decades in France. Moti Mahal is a fine representation of excellent Indian cuisine—its flagship restaurant is indeed in India. PF Changs delivers consistent and generous heapings of Chinese-American food, and it’s no wonder they’re opening a second branch in Beirut City Center. Batchig, sister restaurant to Mayrig, captures Armenian fare in a casual ambiance and at reasonable prices.

At length, what’s important for any restaurateur or prospective restaurateur is to consider the local market landscape and do his homework before thinking the food is going to sell itself. Maybe the first few months the establishment will be packed wall-to-wall with the “voir et être vu” customers who have time and affluence to squander and want to be seen at the latest, hippest joints. But these innovators and early adopters are a mere 16% of a business’ long-term client base. The restaurateur has to figure out how to capture and retain the remaining 84%. They’re the ones who call the shots, and they tend to be price-conscious and picky about quality. Once their customer fidelity is secured, the restaurant must never falter nor cut corners, because one mistake could cost it its business. It’s not as if the diner has a shortage of options on where to feast.

We haven’t even broached the class of fast-food joints like Shawarmanji, Rocket, and Just Falafel, but that would render this article unwieldy. My advice to diners? Be adventurous, but be loyal. Stick to the restaurants that value your patronage and show it. To the restaurants: maintain high standards of quality, taste, and professionalism. Places like Beirut Cellar and Le Talleyrand that were once references in fine dining have fallen out of the ranks not by mistake but by their own foul doing. It takes 20 years to build a reputation but only 20 minutes to destroy it. 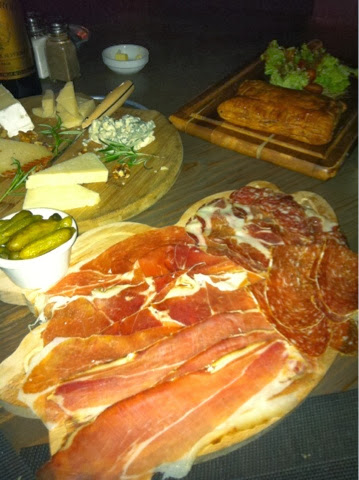