Cuz Burgers Are The New Black: When Form Reflects Function

August 28, 2015
If you’re planning to wait for the hype to subside before sinking your canines into Roadster’s newest meaty novelty, you might want to modify your strategy.

The black-bunned beef burger, the object behind the trending campaign #WhyGoBlack, was launched a couple of weeks ago and will only linger through mid-September. It’s made for some serious Instagram scrutiny, and while most Roadster fans are keen on trying the noir number, some find it aesthetically off-putting. After all, how much of our quotidian cuisine is pitch black?

Here's the anatomy of the burger: a succulent, moist Angus beef patty is topped with cheddar cheese and the usual suspects—lettuce, tomato, finely-diced onions, dill pickles—and slathered with a subtle savory sauce. It immediately transported me back to my delicious encounter with the Rd66, one of Roadster’s five signature Angus burgers.

The main difference, obviously, lay in the bun which, nibbled on alone, had a sweet trace of molasses to it. I’m almost sure it’s tinged with the viscous, onyx-hued honey. But how cool would it have been to stud the bun with sesame seeds? Imagine the black-and-white contrast—now that would have made for some sassy artwork.

This was also my first foray into Roadster’s Dippers, curved potato lamelles lightly dusted with paprika and boasting real body to them. I was a bit skeptical as to why they were dubbed Dippers when no ramekin of dipping sauce accompanied the platter. The portion, too, was noticeably tightfisted, so I hailed the manager. He politely offered us Cheddar Dippers, a plate of the namesake spuds smothered with melted cheddar. Beside them was a Sour Herbs dressing evoking the flavors of ranch, sour cream and onion.

This is what I admire most about Roadster—this is indeed their unique selling point among Lebanese diners and restaurants in general. They are more than prepared to address your concerns and resolve them on the spot. Even if the waiter can’t offer too much in the way of help, the manager tends to be hospitable and nimble. We were grateful for it.

In speaking of Roadster’s black beauty, media and consumers have been quick to quip that Roadster isn’t the originator of the ebony bun. That may be true, as Japan—land of adventurous fast food—introduced black and more recently red to its colored bun collection.

Admittedly, there’s nothing new under the sun. But Roadster still deserves props for being an early mover and riling up its fan base with novel and interesting edibles. Plus, I’m pretty confident their recipe is all-original, relying on locally-sourced carob molasses. How's that for "Made in Lebanon"?

Like its cousin Bar Tartine, Roadster’s all about keeping things fresh and enticing for the Lebanese cool cats. And in this case, curiosity will pay delicious dividends. 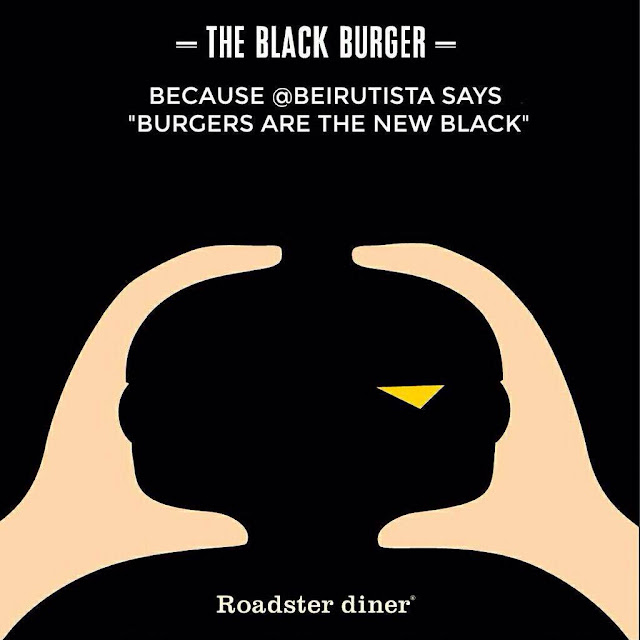