You know the run-down. Saunter through the pebble-paved souks, electing to either fend off or engage with the vulture-like vendors. Explore the Crusader castle on the crest of the hill. Continue your stroll down to the seaside, where a small bay filled with fishermen’s boats is situated beneath a row of typical Lebanese seafood restaurants.

Round the bend and climb the slope past a beach resort and a pizzeria that in days past proudly sported the emblem of Pizza Hut. Come full circle and arrive to a plaza brimming with outdoor cafés, restaurants, and pubs. There’s a wax museum a few steps away, shops displaying fossilized fish, as well as a high concentration of mosques and churches in the nearby vicinity.

For me, it has always been the same touristic hub, the same little knickknacks and the same slate of eateries. You can imagine that the repetition spawns monotony, to the extent that I recently found myself reluctant whenever a trip to Byblos came up. Been there and done that, I’d think. Spare me the traffic!

Until last weekend, when for the first time, I discovered Byblos Sur Mer. The 40-suite hotel perches on prime property overlooking the Mediterranean. Just below, it has its own cove housing seafood restaurant Dar el Azrak and shisha café Marsa. Directly adjacent is the Sophia Bay terrace outfitted with lounge chairs and sunbeds; a children’s pool; and an open sea pool naturally protected by rocks.


Hotel guests gain complimentary access to the chaises-longues and beach, but non-guests, too, can enter for a 25,000 LL cover charge valid toward café food. That's unheard of, next to the exorbitant admission fees charged at other resorts across Lebanon.

So how come I never noticed Byblos Sur Mer? Talk about keeping a low profile! Unbeknownst to me, I’ve been passing by the resort on every excursion to the ancient port city, and yet never has it attracted my attention.

Which is a good thing. Indeed, the boutique hotel blends in seamlessly with its environs, and even the cove strikes you as at once secluded and central. There really is no better view of the sea, no claim to the deep blue waters more entrenched than Byblos Sur Mer’s.

On our visit, we were ushered to a small land-docked boat near Café Marsa transformed into a canopied bar. Sangria and munchies eased us into a euphoric languor before we were led to a mid-sized ferry for a tour of Byblos bay.


Alighting back on dry land, we were steered to Dar el Azrak, cleverly architected to resemble a boat with maximum exposure to both sunlight and the sea breeze. An array of delicious mezza began its gradual descent upon our table, from the quintessential hummus, baba ghannouj, tabbouleh and fattouch to the seafood-intensive dishes of raw fish, octopus Provencale, shrimp in salsa, fried fish and grilled prawns. Dessert rounded out the meal, with a tray of mixed Oriental delights and mafroukeh dissected into scoops of caramelized semolina and clotted cream (kashta).

Service could not have been more doting (special shout-out to Maroun), as staff were at our beck and call refilling drinks, replacing dirtied plates, and replenishing any dish we requested.

So whether you’re a foreign tourist looking to languish about the world’s oldest continuously-inhabited city, as Byblos is heralded, or whether you’re a local seeking out a tranquil edge of sea, Byblos Sur Mer will charm your every fancy.

Don’t forget to pack a swimsuit. 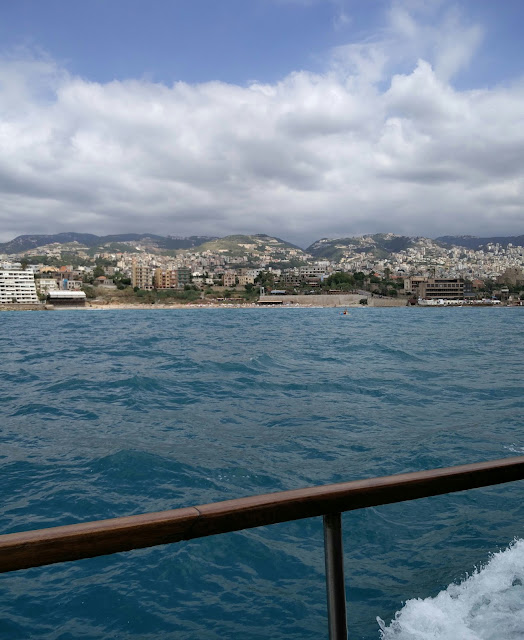