The Backyard Hazmieh: A Social Oasis in Suburbia

June 03, 2016
I can’t begin to tell you how impressed I was with the scale and landscape that is The Backyard. Lebanon’s newest social hangout, perched in Hazmieh just behind the infamous Gardenia gas station, counts 17 venues in its hospitality collection.

At the very front, guests are greeted by Starbucks and Lina’s, both of which sit directly on the moat (yup, there’s actually water flowing through the furrows that run up and down The Backyard). Cross the moat to enter an outdoor fortress, lined with inviting venues all along its periphery.

Here’s the roster, looping counterclockwise from Lina’s: Zaatar W Zeit, Roadster, Divvy, Olio, Classic Burger Joint, Dip n Dip, Les Malains Bistro, Bar Tartine, Tsunami, Trumpet Vintage Bar, Pablo Escobar Pub, and Abdel Wahab. Atop the right arc sits Kitchen Yard, with stellar views of the complex from on high. Brick Lane H and Backstage also figure somewhere in the lineup, though it was a challenge to locate them, what with all the people teeming at the pre-opening Wednesday night. U Energy gym is making its home there too, as is a children's play place.

The project was designed by Bernard Mallat Architects in collaboration with Walid Zeidan Architects on a land lot area of 7,800 sq. m. In a nod to the environment, several structures within the complex were built by recovering site-produced waste materials. Even the bridge traversing the moat was fabricated from steel that would have otherwise been discarded.

Though we didn’t witness it at the opening, two floors of underground parking have been assured, which would really make this a convenient destination for not only residents in the near vicinity but for visitors outside Hazmieh. We can all agree how much of a turnoff the lack of parking is in Lebanon, so this was indeed intelligent foresight on the part of the designers.

The space is open, relaxed and soothing, far less cramped than its sister community in Dbayeh, The Village. Even the eateries are beautifully variegated: there’s something for everyone.

Here Roadster has unveiled its long-awaited rebranded concept, which comes with an overhauled slogan (“Fresh. Casual. Yours.”), a new lozenge-shaped logo, and brand spanking new vibes. Wooden elements, dimmer lighting, a caged bar, and a modern, mature feel all combine to make this a grown-up Roadster, one that has finally come of age.

There’s no doubt that The Backyard will be a destination for Hazmieh denizens and the greater community. Heretofore sparse on the social scene, the heavily residential city now has its very own playground that caters to every extrovert, regardless of age or outlook. 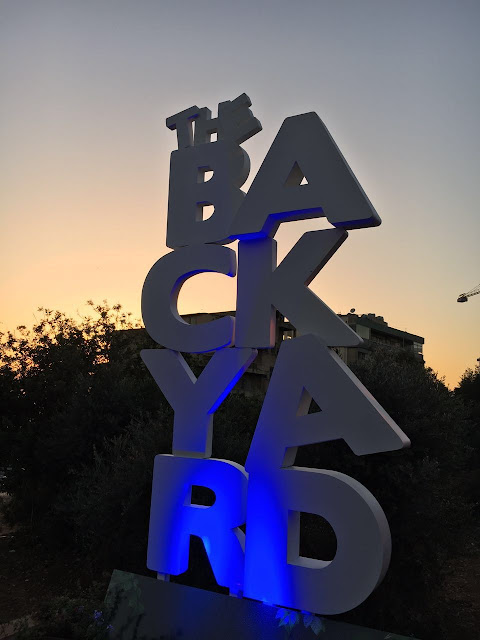