For the Lebanese, remittances have always been a hard fact of life. With a vast diaspora often quoted to be upward of five times the population inside Lebanon, it is not uncommon for Lebanese expats to send money to family members living in the motherland.

But now more than ever, that fact has become a deepening necessity. As the country battles a multi-faceted crisis promising no clear resolution, the Lebanese find themselves struggling to make ends meet, and their reliance on remittances from abroad grows unabashedly.

The real question, however, is how to channel funds safely, cost-effectively and directly into the intended recipient’s hands. I finally found a surefire answer, and I could not recommend it more heartily.

Sendwave is an app born in 2014 out of a desire to slash the high fees and minimize the inconvenience of sending money to people in Africa and Asia. App founder Drew Durbin had been heading an NGO in Africa and understood first-hand the effects of exorbitant remittance fees universally encountered and deplored by donors. In a nutshell, hard-working folks in the diaspora suffered whenever they sent home money to their loved ones. Acting on that need, Durbin developed the Boston-based company Sendwave, which has since expanded its services for diasporas in the United States, Canada and Europe remitting to Asia and Latin America.

Sendwave boasts nearly a million active users and a 4.6/5.0 rating on consumer review site TrustPilot, a score that is considerably higher than that achieved by its competitors.

How Does It Work?

Simply download the app, link your debit card, verify your identity and quickly transfer money to friends and family. 19 countries are served by Sendwave, and Lebanon is the latest to join the list!

Here are the technical details:

(1) The cash, in USD, can be picked up at any Whish location in Lebanon, and there are more than 500 stations!

(2) There is absolutely no charge to recipients. You read that right: zero fees! Competing brands charge a 2% fee to beneficiaries in Lebanon.

(4) In terms of verification required, senders must typically provide a photo of their ID and the last four digits of their social security number (SSN). Recipients must furnish photo ID, the sender’s full name, and the approximate amount of money transferred.

Sendwave has set sending limits for new users at $999 per day and up to $2,999 per month. However, users can increase their limits to $2,999 per day and $11,999 per month after a mere two months of usage. If you do the math (and I encourage you to!), that translates to a $20 sending fee times four transfers, which equals $80 in fees for a maximum monthly send of $12,000 (that's a rock-bottom 0.67% fee rate)! Best part, there are no lines out the door at Whish locations as you would experience at agencies like MoneyGram or Western Union. And that convenience is everything! 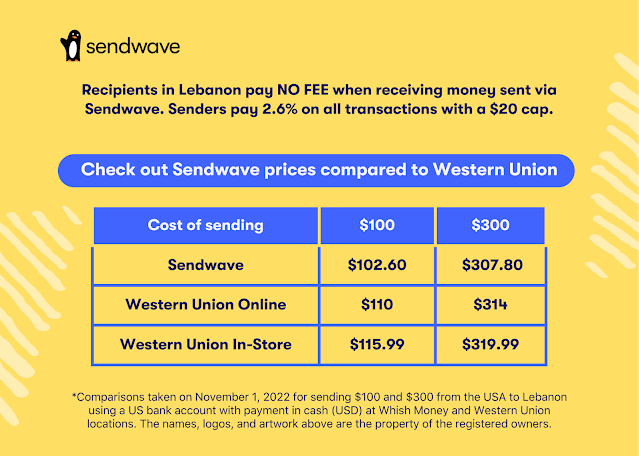 I’m confident in Sendwave’s ability to disrupt the remittance scene in Lebanon. So I’ve teamed up with them to give you a taste of just how effortless the process is! For first-time users, input promo code “ISSA” (that’s my last name!) to receive $10 in free credit to send to your recipient in Lebanon. 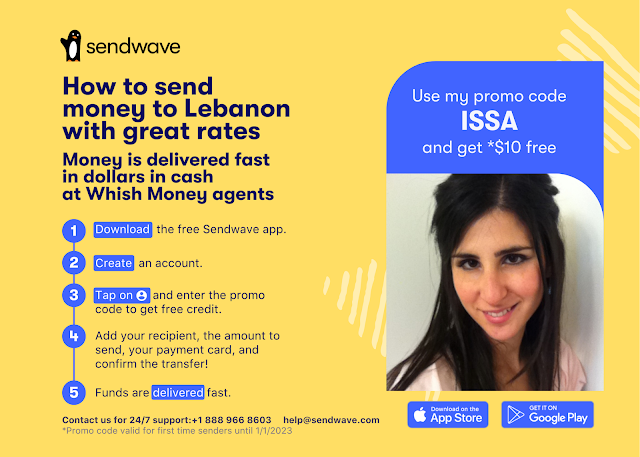 If you do the math (and you should always do the math!), send any amount below $385 and that free $10 credit offsets the 2.6% fee. Now there’s an offer you’d be remiss to miss out on. And be sure to share promo code “ISSA” with friends and family who also funnel funds to Lebanon. Act fast, as this offer ends 1/1/2023!

Go ahead. Send and make waves in the lives of those you love and support. Giving shouldn’t have to come with unreasonable costs. Sendwave makes that possible.

Enjoyed this post? Never miss out on future posts by following Beirutista here.

Lebanese Delicacies That Are Off-the-Grid: Yay or Nay?

This article has been adapted from the original version, which is published on the  Al Wadi Al Akhdar website  under the  "Visit Lebanon" tab . Lebanese fwerigh , or stuffed intestines ( photo source ) Lebanese cuisine might strike the unsuspecting as dainty, delicate and delicious with its vegan tabbouleh, manakish za’atar and hummus. But beware: it’s got a gut-wrenching side to it. We’re talking liver; raw meat flanked by white cubes of pure fat; snails; frog legs; sheep brains; beef tongue; and the list goes on, and on, and on, for about the length of a sheep’s intestines (also a dish in the exotic roundup!). If you’re a diehard Lebanese, you undoubtedly dote on these delicacies and gloat about their dense nutrient and vitamin content to anyone who questions their merits. There’s not an ailment out there that can’t be cured with these antidotes. If you’re less adventurous with what you eat, you probably want to stop reading right about here. Go ahead, sign off. We’re wa
Read more