July 06, 2012
Last night, I had the privilege of seeing B.B. King perform live in Byblos for the International Music Festival 2012. I left my house in Mansourieh at 7 and inched my way to Byblos at snail's pace, thanks to the miserable summer traffic. We got to the Mina, where the risers have been set up for the monthlong music festivities, at around 9, just in time for the King of Blues' dazzling opening. The atmosphere was abuzz with excitement and anticipation as the 86-year-old blues legend strummed on his guitar Lucille, first purely instrumental, then nearly a half hour later, adding in vocals. People kept pouring in even after 10pm, knowing full well that any minute in Blues Boy's presence was more than worth it.

Byblos itself was not swollen with crowds, as it had been last week for Slash's concert, when I could barely get through the throngs of people in the Old Souk to get to the Mina. The ambiance was calmer, perfectly mirroring the style of music the city swayed to.

I got to reading about BB King in the Byblos Festival Review magazine distributed to all concert goers. Born Riley B. King in 1925 on a cotton plantation in Mississippi, he hitchhiked to Memphis, Tennessee, the epicenter of music in the South, at the age of 22. His break came just a year later when he performed on a famous radio program, and one engagement led to another, and soon he was performing at dances and in clubs. He is known for his dedication to music playing, as in one year alone, he played an astounding 342 one-night stands! King's supposed "Farewell Tour" in 2006 was outlived by world tour after world tour, as he jokingly remarked that Farewell in no way meant it'd be his last.

I have to commend the music committee members who selected and invited the ensemble of performers coming to Lebanon this summer. Moreover, the designated parking areas and free shuttles busing people from their cars to the Mina reflect nicely on the city's effort to accommodate and be accessible to tourists. BB King: live in Lebanon! That's a story for the books. 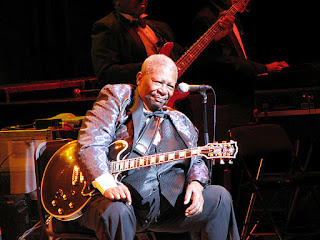 Photo above from King's Ontario, Canada, performance in 2007 (http://en.wikipedia.org/wiki/File:BBKing.jpg).