July 04, 2012
I usually trek over to City Mall Dora on my lunch hour for an escape from the office. City Mall has long been very popular with both the Lebanese and foreign crowds, owing to its convenient location, giant TSC supermarket, and a plethora of restaurant and cafe venues. I noticed a new anti-smoking campaign in the form of small icons depicting, rather than a cigarette, a fork or lipstick wand nestled between two fingers. I thought to myself that this was one good step in the direction of phasing out public smoking, but then I saw larger banners prohibiting smoking inside City Mall and penalizing wrongdoers at least LL135,000 ($90 USD) for any infraction. 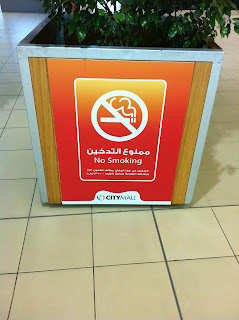 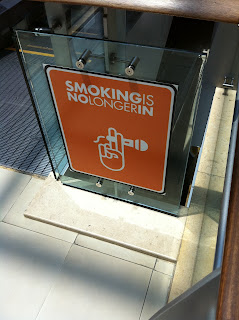 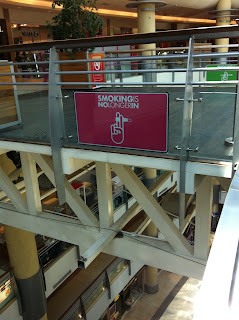 Astonished, I walked up to a waiter inside Colombiano coffeehouse and asked if it were true. By the looks of it, yes, he nodded, but customers sitting at Colombiano were welcome to light up. I chuckled to myself. It's profits before principles in this country.

Sure enough, when I plopped down on a sofa inside Starbucks, I was greeted with the familiar smoke that has become a mainstay of the Lebanese scene. It's going to take more than a few measly banners to bring this society up to speed with its Western counterparts.
general news
Location: Nahr El Mout, Lebanon

Lebanese Delicacies That Are Off-the-Grid: Yay or Nay?

This article has been adapted from the original version, which is published on the  Al Wadi Al Akhdar website  under the  "Visit Lebanon" tab . Lebanese fwerigh , or stuffed intestines ( photo source ) Lebanese cuisine might strike the unsuspecting as dainty, delicate and delicious with its vegan tabbouleh, manakish za’atar and hummus. But beware: it’s got a gut-wrenching side to it. We’re talking liver; raw meat flanked by white cubes of pure fat; snails; frog legs; sheep brains; beef tongue; and the list goes on, and on, and on, for about the length of a sheep’s intestines (also a dish in the exotic roundup!). If you’re a diehard Lebanese, you undoubtedly dote on these delicacies and gloat about their dense nutrient and vitamin content to anyone who questions their merits. There’s not an ailment out there that can’t be cured with these antidotes. If you’re less adventurous with what you eat, you probably want to stop reading right about here. Go ahead, sign off. We’re wa
Read more