September 12, 2014
Growing up in the US, I was taught from a young age about the importance of dental care. Visits to the dentist were biannual, during which time teeth were meticulously cleaned, polished, and X-rayed for possible cavities. Commercials on TV emphasized the nutritional benefits of milk: “it does the body good” and “Got Milk?” were catchy slogans to remind us that the calcium in dairy strengthened our teeth and bones. Even tap water in the US is fortified with fluoride to prevent tooth decay.
Aesthetics was a big thing, too (where do you think the term "Hollywood Smile" came from?). My classmates got braces and retainers as early as the fourth grade (that’s “huitième” for all you French speakers). I dodged the bullet, because fortunately my teeth were aligned.
﻿ ﻿
When I hit high school, flossing was starting to become mainstream. Floss before you sleep, we were instructed, because the gunk wedged between your teeth coupled with the humid state of your closed mouth would make for the perfect breeding grounds for bacteria overnight. And in fact, the difference in freshness of breath the next day was palpable.
Later, during my college years living on campus, I noticed that my housemates uniformly brushed their teeth at least twice a day and flossed before sleeping. Indeed, the media and the American Dental Association had conveyed the message successfully, and we were all faithful disciples.
Moving overseas, first to Paris and thereafter to Beirut, I’ve observed that the gap in dental care habits is horrifically vast. In France (and the UK, too), hardly anyone has straight teeth, and stained yellow choppers seem to be the norm. In Lebanon where presentation is everything, younger generations are getting their teeth straightened from a young age, just like their American counterparts, but flossing remains virtually nonexistent. Brushing teeth, while certainly more common than flossing, is still not a given. Thus, regrettably, the culture of oral healthcare is underdeveloped in this part of the world.
I recently attended the launch of a new whitening toothpaste for sensitive teeth manufactured by the dental care giant Sensodyne, part of the GlaxoSmithKline Group. According to research commissioned by Sensodyne and independently conducted by YouGov, 79% of people in Lebanon face issues with sensitive teeth leading to altered eating habits and decreased happiness levels. Apparently, 40% of Lebanese folks avoid flashing their teeth or smiling in photographs because they’re uncomfortable with how they look. While teeth whitening has started to gain ground, few are cognizant of the harmful effects such abrasive techniques can have on their pearly whites.
To address this need, Sensodyne released a new product, True White, with an ultra-low abrasion factor that relieves sensitivity and whitens teeth. Ever the engineer, I decided to dig deeper into the science behind it. 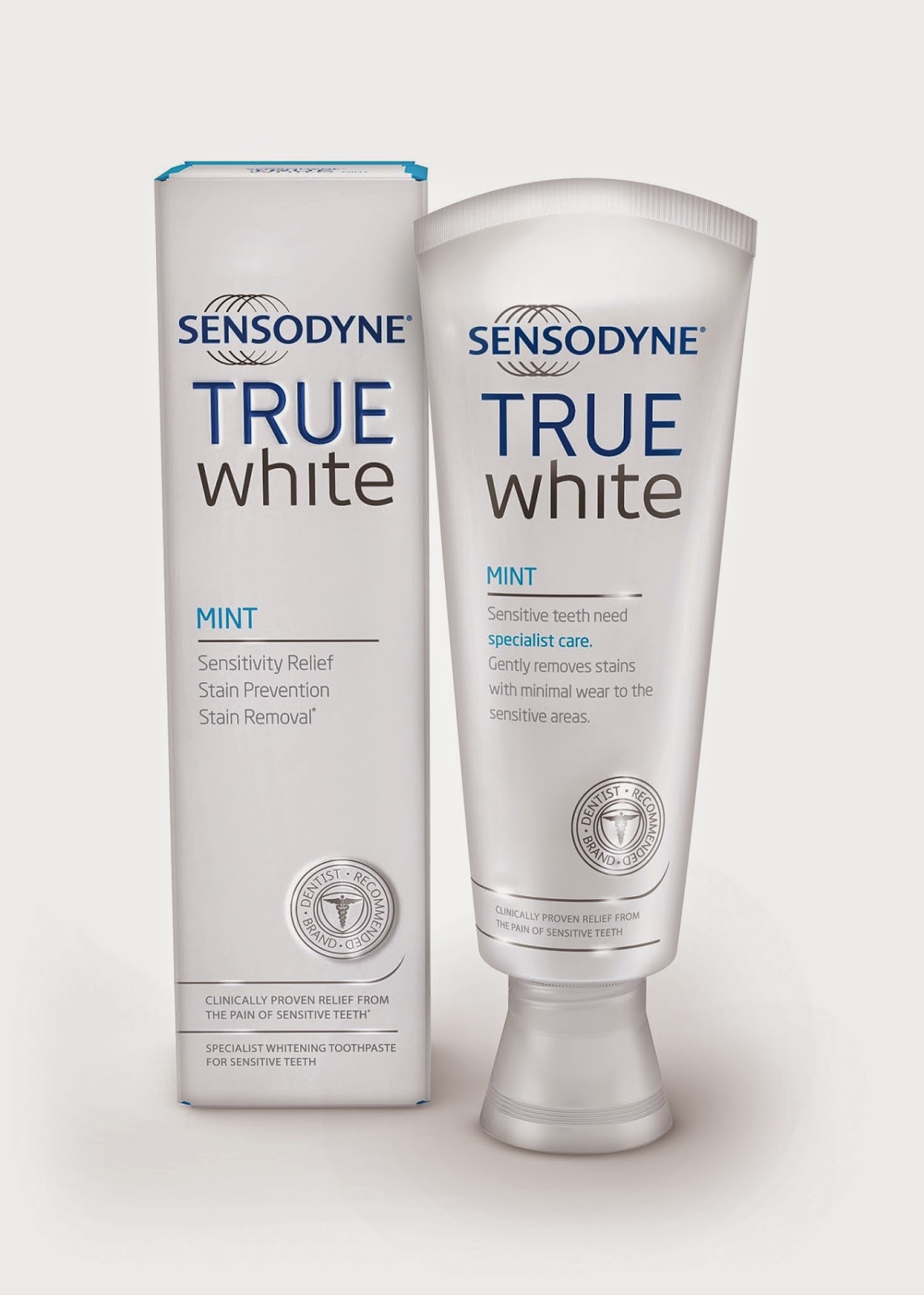 Most toothpastes rely on silica to remove teeth stains, but imagine the effect of sandpaper sliding back and forth across your teeth. Gruesome, isn’t it? Sensodyne True White incorporates a compound called STP (sodium tripolyphosphate) to gently remove and prevent extrinsic tooth stains, with minimal wear to sensitive areas of the teeth. It’s far less abrasive than standard whitening toothpastes. Out of curiosity, I’m embarking on my own experiment of the product to see if and how well it delivers on its promises. While True White doesn’t lather and foam like Colgate, I’ve already noticed after just four trials how much smoother my teeth are as I run my tongue over them.
Teeth whitening aside, I encourage everyone to take oral healthcare seriously. There’s nothing more ravishing than a healthy, clean smile and fresh breath to draw your audience in close. Plus, how else will you be able to follow my culinary adventures, indulging like a gourmand, if your teeth are in constant pain? ;)
Bust out the minted floss and thread those fangs.
sightings views

This article has been adapted from the original version, which is published on the  Al Wadi Al Akhdar website  under the  "Visit Lebanon" tab . Some of the most memorable and adventurous meals are often come by in the street. In Beirut, that certainly rings true. No matter which narrow city alley, village souk , or seaside boardwalk you find yourself exploring, there’s bound to be a delicious bite within arm’s reach. While meaty shawarma wraps and lahm bi ajeen pies readily come to mind in Lebanon, there is in fact a myriad of vegan foods to appeal to every palate. These savory meatless munchies form an integral part of Lebanese cuisine. To be quite frank, going vegan in Lebanon may prove to be an effortless endeavor! Lebanese falafel inside pita bread ( photo source ) Manakish Za’atar Pizza is to the Italians as “manakish” is to the Lebanese. It’s all about fresh-baked, soft, round flatbread crafted before your very eyes. If you’re visiting a Lebanese furn , or bakery,
Read more