April 07, 2017
Having been blogging steadily for close to five years now, I’ve witnessed a complex network of players -- from the basic social media user to the more evolved specialist, community manager, and marketer -- determined to milk the proverbial social media cow. With every new term or title drawn up for a field that just a decade ago didn’t exist, you’d be surprised by the number of phonies I’ve seen interacting in an entangled web of digital dystopia.

From accounts ripping off your photos and labeling them as their own, to PR agencies inviting you to wholly irrelevant events, to still other PR agencies failing to invite you to events directly implicating your blog motif: I’ve seen every blooper in the book. Can you relate?
SCENARIO 1: The Photo Thief

I don’t know about you, but I never forget a photo I’ve taken, as if it were an intrinsic part of my genetic make-up. If you present me with an array of a dozen photos and ask me which one I snapped, be it one year or five years ago, I can identify with 99% accuracy which is mine.

Anyway, there I was, scrolling through my Instagram feed in search of inspiration, when suddenly I stumbled upon a photo appearing eerily familiar.

The caption didn’t credit anyone, but jeez! I could almost swear that’s the exact angle I took of the same object, and wait, isn’t that my hand clutching the crêpe? Indeed, I cross over to my account and shoot down to roughly the period I posted that photo, and there in undeniable clarity is the original.

The worse bit is the crêperie where I captured that photo reposted the scam artist’s version and lavished praises upon his expert photography skills.

My strong sense of ethics dictated that I gently let both restaurant and scam artist know of the photo’s true author. The crêperie apologized for any confusion and in true professional fashion, removed the photo. The impostor sent me private messages, exhorting me to “relax,” and what’s the big deal if he reproduced my work without attribution? 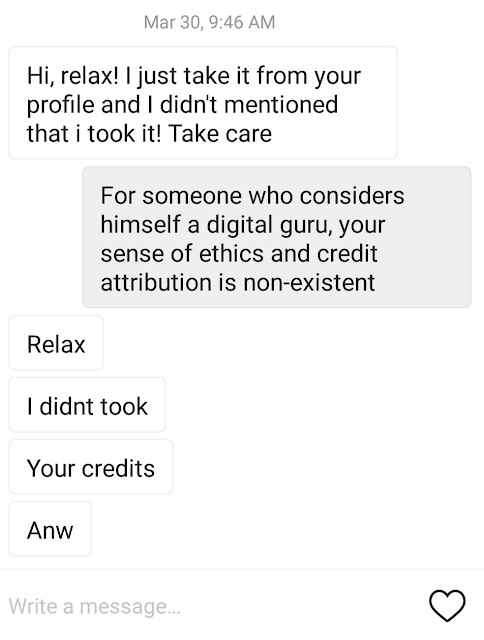 Hmm, clearly this copycat wasn’t around for the all-important lessons on plagiarism (and grammar) at school.

Again, there I was merrily scrolling through my Instagram feed one evening before bed, when suddenly I noticed a repetition of photos by a number of “social media influencers” (that term makes me cringe – it sounds so superficial). They’re all diving into the same platters of mini burgers and sipping on the same gin and tonics at the same venue in Beirut. It’s clearly an event by invitation.

Whatever. I’m not going to make a big fuss over being excluded. Heck, I may have ranked in the top ten of bloggers abroad, but you know, here in Lebanon, my status is not as certain (how can it be, when everyone in this country is self-professedly #1?). Let’s not get carried away, Beirutista.

I forgave the oversight by the PR agency and moved on with my life. But a few days later, I received the press release from said PR agency, imploring me to share the outcome of the event with my readers on my “esteemed blog.”

Wait, what? So they have my email address, and I’m esteemed yet apparently not enough to have scored one of 800+ invitations mailed out to every digital doofus in the realm. And now they want me to disseminate their literature.

I’ve concluded with a 95% confidence interval that PR agencies (in Lebanon) are incompetent, shortsighted, and generally stupid. I was starting to accept the fact that most of them don’t even follow the blogosphere and thus cannot tailor invitations to the right audience. But to go this far?! Sheer idiocy.

I was struck with flashbacks from my high school yearbook, when the senior class voted for students embodying superlatives like “class clown,” “most likely to succeed,” and “most athletic.” They’re sham categories, because no numbers justify them. Nothing more than a popularity contest.

And that’s exactly what this competition looked like. A few of the nominees aren’t even active on social media anymore, and some don’t quite fall within the bounds of their assigned category (I won’t even get started on the Instagrammer v. blogger debacle). Besides, how does this fly under the banner of a regional competition when almost all of the participating candidates are in Lebanon?

Seems to me that anyone can organize their own unverified competition and start blaring it across social media. I’ve never heard of this group, let alone recollect seeing a call for nominations. But by all means, “contact us if you know a blogger who should be nominated and we will study your request.”

Request, huh? Ask kindly, and you just might get shortlisted. Yeah, that’s got the makings of a genuine competition written all over it.

Expect a sequel or two to this article as I rake up more muck navigating social media. And if you've got any entertaining stories of your own, please share them below!