February 07, 2018
Like many Lebanese who were sucked in to the ravaging Civil War, Georges and Daniel Daou’s emigration from their homeland is a common one. The brothers fled to Paris and thereafter to southern France when an errant rocket struck their family home at the start of the violence. Later, they would transplant half way across the world to pursue engineering degrees at the University of California San Diego.

What is rather uncommon, and admittedly very courageous, is how they went from being successful techies to passionate winemakers in their newfound home and heartland.

It seems the Daou duo always yearned to partake in the beauty of the land and nature. In their minds, they held sacred their grandfather’s ancient olive trees and often reveled in the vineyards from childhood visits to the family village.


When Daniel decided that the time was ripe to find a terroir conducive to producing Cabernet Sauvignon, the brothers stumbled upon a mountain in the Adelaida District, nestled in the rugged coast range west of Paso Robles in Central California. Rising above sea some 2,200 feet (670 meters), the property had in the past spawned notable wines and was widely regarded as the bedrock of modern winemaking in the region. This “jewel of ecological elements,” as one famous wine authority described it, cached raw potential waiting to be unlocked.


Georges and Daniel acquired the land and toiled tirelessly to restore the original redwood winery. In doing so, they would preserve a vital part of Paso Robles history and finally fulfill the mountain’s captive promise. They named it, aptly, Daou Mountain.


Today, production is limited but demand is soaring for their Estate Cabernet Franc; Estate Micho, a blend of Merlot and Cabernet Sauvignon; and Estate Sauvignon Blanc. All three wines scored above 90 by various wine connoisseurs and are available exclusively to Daou members and guests of the Estate.


So it came as a huge splash in wine news when Daou Vineyards agreed to make available their vintages in the founders’ homeland. Lebanon presently enjoys a thriving viniculture with over 40 labels spanning the country. Our wines have made it to the farthest reaches of the world and are starting to turn heads for their stunning aromatics, crisp minerality, and well-balanced acidity.

And here, Daou wines, in an unequaled show of solidarity with its Lebanese-soil counterparts, are traveling against the tide to be sold on racks for our gourmet consumption! 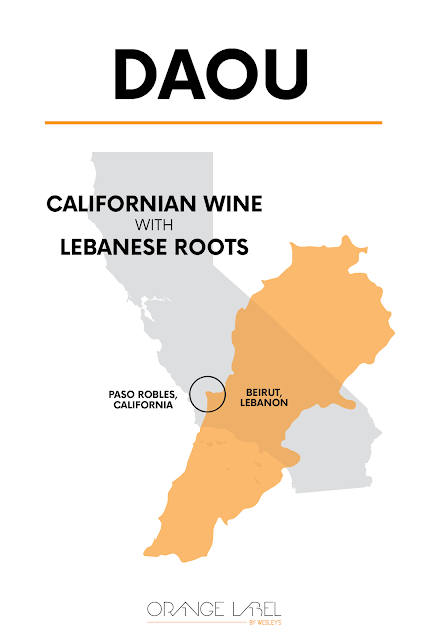 If you guessed Wesley’s Wholesale, you’ve earned bragging rights for your vision and foresight. The major American megastore, whose latest outlet in Hazmieh features a whole floor – Orange Label – dedicated to the sophisticated palate and most discerning of tastes, will be unloading Daou wines for the first time on Saturday, February 10, and you’re invited!

You read right. You’re ALL summoned to witness history in the making as Wesley’s brings a fine Californian wine to the land of the artisans who created it. Such a monumental occasion calls for a celebration, so we’re rolling out the red, er, orange carpet and throwing a wine and food pairing affair boasting cheese, crackers, chocolates, and anything else that complements the grape derivative.


Go ahead and book your calendars for this Saturday evening, and come sip and slosh Daou’s sleek wines. Because how often can you say you’ll encounter an American import with a Lebanese twist?

That’s indeed rather uncommon, just as the plight of the determined Daou brothers.

To learn more about Daou wines and the visionaries behind it, watch this special interview by Ricardo Karam which aired on Lebanon’s Future TV.


Beirutista is Brand Ambassador at Wesley's Wholesale. What exactly does that mean? Well, if you liked this post, you can look forward to similar ones every month or so. I'll be blogging about a variety of exciting new projects Wesley's has underway, in addition to sneak peeks and product leaks! Expect cool new product giveaways from time to time, and if you're a real Wesley's obsessive like I am, I'll gladly hook you up with 10% off your next visit. Just shoot me a message at any one of my contact coordinates here.

A selection of photos was extracted from the gallery at https://www.daouvineyards.com.