Le S.T.A.Y. and Sweet Tea Are No More

April 11, 2013
It'd been some time since we'd last indulged in the heavenly French pastries of Sweet Tea in Beirut Souks. The other day, we noticed a new menu posted outside the salon de thé--it was mystically more comprehensive, with many savory offerings, in addition to their traditional sweets--and we ventured in. Everything looked the same, except prices had been slashed, and considerably so at 25% off across the board.
Our friendly hostess and waitress, with whom we were well-acquainted from previous visits, explained that Sweet Tea is now The Garden. Apparently, Michelin-starred chef Yannick Alleno, the mastermind behind Sweet Tea and its sister restaurant, Le S.T.A.Y., has sold the concept to the same chef who launched the urban coffee shop [Grid]. The good news is that the entire dessert proposition will remain intact.
Sure enough, the tarte tatin and Religieuse were exactly as we remembered them, if not more generous (and both at 6,000LL instead of 8,000LL and 10,000LL, respectively). The waitress even offered to heat up the tatin to recreate the enviable apple pie experience. The tea is still Dammann Frères, and a whole pot--enough for two--has dropped from 9,000LL to 7,000LL. The same elegant silverware and ceramic plates were presented, but the napkins are now generic, devoid of Sweet Tea's pink ribbon logo.
Now that prices are stomachable, we will surely consider sampling The Garden's savory dishes in the future. 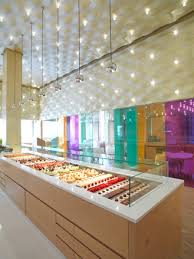